But now, after spending billions on fancy digs and convincing workers to move to some of the priciest real estate markets in the country, these same tech companies must adapt to a sudden and potentially prolonged shift to telework. The overnight change was sparked by the pandemic, but the newfound flexibility could persist long after the current global health crisis ends.

On Thursday, Facebook said it plans to allow some of its tens of thousands of employees to work remotely full-time, and will also begin ramping up remote hiring for certain roles. Within five to 10 years, as many as half of all Facebook employees could be working remotely, according to CEO Mark Zuckerberg.

Facebook is far from alone. Twitter (TWTR) said last week it would let eligible workers continue working remotely “forever” if they choose. Coinbase, the cryptocurrency startup valued at $8 billion, said Wednesday it will become a fully remote-first company after the pandemic. Other startup executives and industry experts told CNN Business that tech companies are downsizing their physical footprints, or looking to more short-term office space.

The shift to extended telework policies could have far-reaching consequences for the tech industry, affecting everything from wages to commercial rents, and even the way new companies are born, according to interviews with human resource execs, real estate professionals and venture investors. It’ll create new challenges for both companies and their workers, from how best to foster collaboration to questions of who should shoulder which costs. Some in the industry, from hardware engineers to cafeteria workers, may not be able to benefit from the change — and could be hurt by it if their employment dries up or their home prices drop in the event of an exodus. And it could make Silicon Valley as we know it — a regional cluster of tech offices where people flock to work and network — seem like a thing of the past.

Even before the pandemic, more than a third of San Francisco residents were considering leaving, according to research by city officials. And nearly half of Facebook employees who expressed interest in working remotely said in internal surveys they’d probably seek to move elsewhere, Zuckerberg said.

“This is likely a tipping point that’ll accelerate some trends that have been bubbling for a while,” said Steve Case, the investor and former CEO of AOL, who for years has been advocating for technology hubs outside of New York and the Bay Area. “And some of that is about how work is organized, but it will also hopefully result in more of a dispersion of talent, and ideas, and job creation, and economic growth to cities that have started rising.” 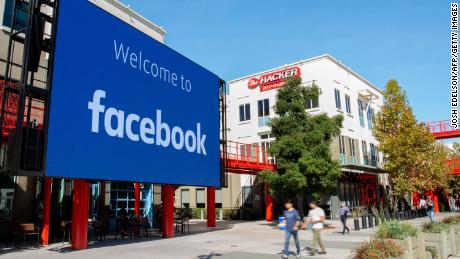 Facebook’s Menlo Park headquarters, which opened in 2015, occupies nine acres and has its own network of walking trails. At the time, CEO Mark Zuckerberg described the office’s open floor plan as the largest in the world, “a single room that fits thousands of people.”

Tech comes under pressure to pivot to telecommuting

Silicon Valley’s flashy perks were never just for fun. They reflected a massive arms race in tech hiring, where convincing the right autonomous car engineer to work for you could mean the difference between your next big breakthrough or having to follow a rival’s lead.

Amid that constant competition for talent, Twitter and Facebook’s remote-work announcements raise pressure on other tech companies to consider supporting permanent telecommuting, experts say. The calculation is far from simple: It calls for a decision in the face of tremendous ambiguity about Covid-19 that could have long-term impacts on a company’s culture, brand and long-term costs.

Companies will likely take a range of approaches, according to labor economists and HR executives. But collectively, they say, employers will increasingly be expected to provide some form of added work flexibility. The pandemic was a turning point. An option that was once limited to roughly a third of the workforce is now here to stay — particularly if highly sought-after job candidates make it a demand.

“There’s a subset that says, ‘Can we please come back to the office?'” said Fran Katsoudas, executive vice president and chief people officer at Cisco, which expects only 15% of workers to be back at their desks this fall. “There’s a subset that’s discovered really how much they enjoy working from home. Given the fact that we’re going to stagger the return to work, hopefully we’ll accommodate both those perspectives.” 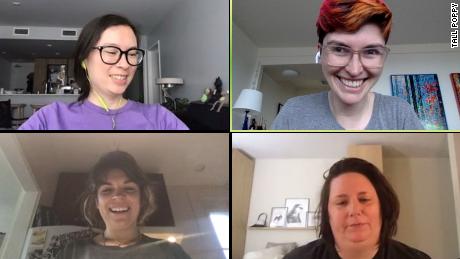 Tall Poppy employees during a Zoom meeting, remotely working from home. CEO Leigh Honeywell doesn’t expect to return to her office before a coronavirus vaccine is widely available. The Bay Area-startup just hired its first employee who works from the other side of the country — in New Jersey.

Though many are working from home under lockdown, the prospect of more flexible work policies has Silicon Valley workers wondering what life could look like beyond the Bay Area’s exorbitant home prices, rents and high taxes.

“This is the question me and my friends are all talking about at the moment,” said one Google employee who spoke on condition of anonymity because he isn’t authorized to speak publicly. “There are a lot of interesting cities where you could have a really enjoyable lifestyle.”

Adam Rice, VP of sales at the commercial drone company Kespry, said he could easily see himself working from home at least two days a week — and so can his boss, whom he said is “talking about working from Tahoe every Monday and Friday.”

That decision may come at a cost. At Facebook, workers who relocate to a more affordable city could have their salaries reduced to reflect lower costs of living there, Zuckerberg said this week. And during the pandemic, some companies have moved to restrict benefits, such as free meals, from staff working at home.

But that’s not stopping tech workers from wanting the work-from-home life.

In an internal survey recently by the retailer Overstock.com, a significant majority said they favored working from home. Asked when they would prefer to return to the office, “What’s the hurry?” was the response from as many as 76% of employees, said Jonathan Johnson, Overstock’s CEO. 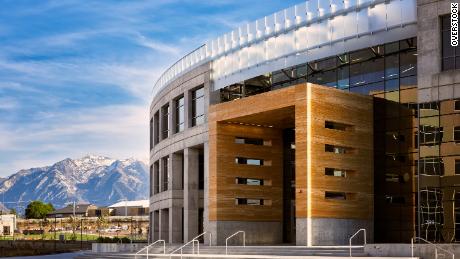 Overstock’s headquarters in Salt Lake City, Utah is officially known as the Peace Coliseum. From above, the 231,000 square-foot building is shaped like a peace sign and features a daycare, health clinic and juice bar.

Reducing office footprints, for the companies that can

That’s prompting Johnson — and many other executives — to rethink their use of office space.

Leigh Honeywell is the co-founder of Tall Poppy, a two-year-old Bay Area startup specializing in digital security and fighting online harassment. In March, Honeywell was in the middle of negotiating an office move just as California’s stay-at-home order came down.

“Talk about a bullet dodged,” she said. “If we’d given up our co-working space for a $10,000 a month office space [we can’t use]? I mean, we have some money in the bank, but not that much money in the bank.”

Now, Honeywell doesn’t foresee going back to the office for months, until after a Covid-19 vaccine becomes widely available. Recently, Honeywell made her first official remote hire — a new employee based in New Jersey.

“Almost every single one of the conversations I have every day with companies is, ‘We know we don’t need as much office space as we have now, we know that for the next 18 months we’re going to do a lot of telecommuting, and we think it’s going to be permanent,'” said Bryan Murphy, CEO of Breather, a company that rents out workspaces to teams for as little as hours at a time.

I think there are a lot of people in the Bay Area who are only here for the paycheck — they don’t have any family here, or they’re suffering under extremely high costs of living and traffic. If it becomes possible to make an escape, I think many will.

But retreating from office space will be harder for the big tech companies. In recent years, tech headlines have been dominated by increasingly flashy real estate deals: Apple’s new spaceship headquarters in Cupertino, which cost an estimated $5 billion; Google’s $2.4 billion leap into New York’s Chelsea Market; Amazon’s contest to bestow its “HQ2” on the highest metropolitan bidder; a Frank Gehry-designed Facebook campus with 525,000 square feet; the Salesforce Tower hovering over San Francisco.

These massive spaces aren’t going away, said David Bergeron, president of T3 Advisors, a corporate real estate firm focusing on tech clients. But they might have to be used differently, particularly in the medium term while social distancing guidelines remain in effect. The distinctive open-plan office designs that Silicon Valley helped pioneer may no longer be the norm, he said.

Instead, “what we’ll see as a result of Covid is a return to personal, private workspaces,” said Elizabeth Knuppel, a human resources expert at technology investment firm TCV.

The shift to more remote work could create new hindrances to the type of spontaneous in-person collaboration Steve Jobs imagined when designing Apple’s circular headquarters. But big tech companies may also enjoy new cost savings from expanded telecommuting — both by improving retention, and from the need for fewer perks.

Of course, that’s a double-edged sword: Many of those perks represent jobs for cafeteria workers, security guards and cleaning crews. The rise of remote for white-collar workers could therefore exacerbate workforce inequalities that run along the lines of race, class and education.

Accelerating a shift away from the coasts

Big tech companies have been gradually expanding their office footprint beyond San Francisco and New York for years. But those additions were by and large viewed as smaller satellites. Now, there’s potential to flip longstanding assumptions about where the tech hubs really should be, with potential consequences for the culture and real estate values of markets like San Francisco.

Facebook’s plan, for example, calls for hiring in areas close to its existing offices, such as Portland and Pittsburgh, but it also intends to create new clusters of employees in markets like Atlanta, Dallas and Denver.

“I think there are a lot of people in the Bay Area who are only here for the paycheck — they don’t have any family here, or they’re suffering under extremely high costs of living and traffic,” said Andrew Chamberlain, chief economist at the job-hunting site Glassdoor.com. “If it becomes possible to make an escape, I think many will.” 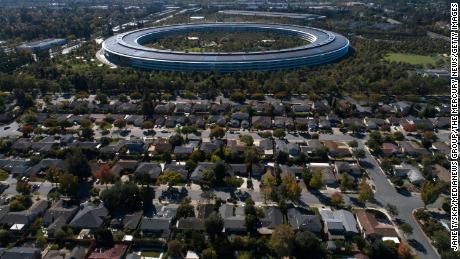 Apple Park in Cupertino cost the iPhone maker an estimated $5 billion to build. It features massive, four-story-tall windows that slide open like subway doors. The entire building rests on hundreds of steel saucers that keep it stable during earthquakes.

Case calls this trend “the rise of the rest.” Emboldened by the possibilities of working from anywhere, more employees could strike out into more livable parts of the country like Raleigh, St. Louis or Oklahoma City, while employers increasingly look to these regions for affordable talent. And as they go, venture capital may follow.

That could suit investors exhausted by the growth-at-any-cost mentality that’s led to financial rollercoaster rides like Uber (UBER). In regions where funding has historically been harder to come by, entrepreneurs tend to bring a “bootstrap, capital-efficient mindset” and a focus on sustainability over growth, Case said.

The shift to supporting more remote work, then, may not only have lasting effects on where the next ground-breaking innovation occurs, but also on the way people view Silicon Valley, and how the tech industry understands itself more generally.

Instead of a 50-mile stretch of businesses and campuses, where founders flock to investors on Sand Hill Road and residents stumble on the next iPhone left in a bar or top-secret self-driving cars whizzing by, this new future imagines the tech industry as just people sprinkled in towns and cities all over America.