The most closely related work to our framework is the FVC-onGoing web system. This system has the following limitations:

If any of the above mentioned limitations constitute a problem for you, then you should use our framework.

Our framework is implemented in C# with .NET Framework for two main reasons. First, C# has become one of the most popular programming languages. Second, the technologies, tools and class libraries available on .NET Framework save us a lot of time of coding.

Our framework allows performing fingerprint verification experiments for databases B of FVC2000, FVC2002 and FVC2004; and databases A of FVC2002 and FVC2004. In these experiments, we use the performance indicators of the Fingerprint Verification Competitions [2] (EER(%), FMR100(%), FMR1000(%), ZeroFMR(%), Time(ms) and ROC curves). Additionally, you can include experiments with a custom evaluation protocol or different databases.

One of the goals that we kept in mind while developing this framework was to achieve class interfaces as simple as possible. This way, adding new algorithms is pretty straightforward.

We hope this work motivates you and more people to collaborate with us in order to implement more algorithms.

In this article, we briefly explain how:

Before Using the Framework

An extension of this framework only for research purpose appears in https://sites.google.com/site/miguelmedinaperez/software/fprframework.

With this article, we provide the following files:

Extract the file “FingerprintRecognition.zip” and build the solution. Then you can debug the project “FR.FVCExperimenter” or you can execute “FR.FVCExperimenter.exe” in the directory containing the generated assemblies. The following window will open: 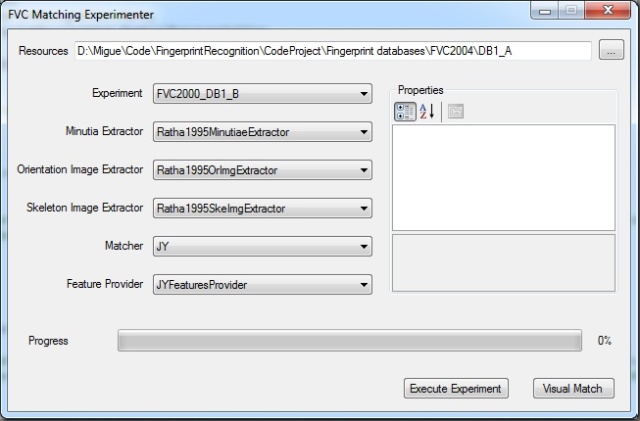 In the “Resources” text box, specify the path of the database that you are going to use, for example: “D:PR DatabasesFingerprintsFVC2004DB1_B”. Select the proper experiment type in the combo box with label “Experiment”. Use the combo boxes “Minutia Extractor”, “Orientation Image Extractor” and “Skeleton Image Extractor“ to select the algorithms that will be used to compute the basic features (minutiae, orientation image and skeleton image).

Use the combo box with label “Matcher” to select a fingerprint verification algorithm, and the combo box with label “Feature Provider” to select the algorithm that will be used to store and retrieve the features for the selected matcher. Despite that we implemented only one feature provider for each matcher, there are possible scenarios where you may have multiple feature providers for each matcher.

The grid with label “Properties” allows changing the parameters of any selected algorithm.

Click on “Execute Experiment” button to run the experiment. This experiment uses the evaluation protocol of the Fingerprint Verification Competitions [2]. The performance indicators computed in this experiments are: EER(%), FMR100(%), FMR1000(%), ZeroFMR(%), Time(ms) and ROC curves. These indicators are saved in a file which name is formed by the name of the matching algorithm concatenated with “.Summary.csv“. This file is saved in a folder by the name of “Results” in the same folder where the fingerprints are stored. Two more files are saved, one file containing the false matching fingerprints and the other containing the false non matching fingerprints.

If you want to visualize features for certain fingerprints, then you can use “FR.FeatureDisplay” project. In “Fingerprint Feature Display” form, you can change the feature extractor and feature display. In the framework, we include classes to visualize minutiae, orientation image and skeleton image.

The following is an example visualizing the orientation image of a fingerprint:

Matching Fingerprints Out of This Framework

This section presents an example of using the framework to match two fingerprint images in a custom user application. It includes the three steps to compare two fingerprint images: image loading, feature extraction, and feature comparison. In this case, users need to add references from their application to the assemblies FR.Core and FR.Medina2012. Assemblies SHullDelaunayTriangulation and ImageProcessingTools must be included in the output folder where the binary files appear.

The example, using the M3gl matcher, shows how easy is to use the framework, and how clean and self-explanatory the user code is. The rules for good designing applied in the framework allow the users to replace or change any component with minimal effort. For example, in order to use PN matcher in the above code, users only need to replace MTripletsExtractor with PNFeatureExtractor, M3gl with PN, and reference FR.Medina2012 with FR.Parziale2004.

Adding New Algorithms to the Framework

The first thing that you need to know is that you do not need to modify the applications of the framework in order to recognize your algorithms because we use Reflection to load all algorithms dynamically at execution time.

You may create as many assemblies as you want in the directory containing the framework. For each new assembly, go to the properties and set the output path with value “..binRelease”.

In order to add a new feature extractor, you must inherit from the generic class FeatureExtractor

In case that your new features are built upon some existing features then you can do like follows:

Now, it is time to create a new fingerprint matching algorithm. Suppose that you want to match features of type MyFeature, then you must create a matcher like this:

In case that you are implementing a minutia matching algorithm, then you should modify the above code as follows:

Integrating Existing Algorithms Into the Framework

The users do not need to modify the framework in order to integrate custom algorithms because Reflection is used to load all the algorithms dynamically at execution time. This way, users should add new algorithms to their own custom assemblies.

In order to use an existing matching algorithm within the framework, the first thing that users need to do is to create a resource provider. Resource providers allow saving (retrieving) to (from) files the resources associated with fingerprints. For example, suppose that users want to integrate SourceAFIS SDK (http://www.sourceafis.org/) into the framework, then the following feature provider can be used:

Now, the fingerprint matching algorithm can be wrapped within the following class:

We performed an extensive experimentation with the fingerprint matching algorithms included in this framework. The experiments setup as well as the statistical analysis of the results can be reviewed at [13].

In this article, we introduced a framework in C# for fingerprint verification. We briefly explained how to perform fingerprint verification experiments and how to integrate your algorithms to the framework. We provided several matching algorithms and feature extraction algorithms that you can use not only for experimental purpose, but also to create your own applications. We provided the source code of all the algorithms so the user can reuse any part of the code as well as any software component.

We would like to thank MSc. Dania Yudith Suárez Abreu for her contribution in improving the grammar and style of this paper. Thanks to Jani Giannoudis for suggesting the inclusion of inner exception parameter in the examples.