Even the co-founder of Stripe admitted there is nothing obviously attractive or exciting about the digital payments technology that is the focus of his company.

“It’s low-margin . . . It’s very competitive,” said John Collison, who launched Stripe in 2010 with his brother Patrick, in an interview with the Financial Times last week. Stripe’s staff are “the strange and weird woodland creatures who are payments fanatics”, he added.

Silicon Valley’s most prominent start-ups are normally consumer internet ventures such as Facebook and Uber — aggressive, fast-growing companies on a relentless drive for global domination and the huge brand awareness that goes with it.

Yet it is Stripe — a name unfamiliar to most outside the tech industry — that now sits atop the list of Silicon Valley’s most prized private companies after investors valued it at $95bn this week.

Stripe’s software makes it simple for any website or app to accept payments, without having to obtain their own licences or strike deals with the many different banks and card operators that the company has already integrated.

Underpinning a near-tripling of Stripe’s valuation in the past year is a belief from investors including Ireland’s National Treasury Management Agency, Fidelity and Sequoia Capital that the digitisation of commerce and payments still has some way to run.

“The size of the opportunity is something that people caught on to,” said Dhivya Suryadevara, Stripe’s finance chief. “It’s not very often that you see a company where it is already so big, but still there’s so much more growth left to go.”

With the internet economy shifting away from advertising and towards ecommerce and payments, Benedict Evans, a tech industry analyst, described Stripe’s opportunity another way: “They are a 3 per cent tax on the future of the internet.”

One of Stripe’s key competitive advantages is doing more with less. It has about 3,000 staff, a third less than Facebook had in 2012 when it went public at a similar valuation. Its online tools are designed to be easy for businesses to adopt without needing a large sales force or support team.

That has allowed it to remain capital-efficient, even as it expanded to more than 40 countries. Stripe has now raised $2.4bn to date, compared with Uber’s $14bn in equity financing before its initial public offering in 2019.

Stripe recorded about $2bn in gross revenues in the third quarter of last year, according to one person who has seen the numbers. Those revenues translated to more than $120m in earnings before interest, taxes, depreciation and amortisation, this person said.

Stripe declined to comment on the figures, which may not be calculated or presented in a way that is directly comparable to publicly listed peers.

The numbers imply that the company is valued on a revenue multiple not dissimilar to other online payments groups that offer a similar set of services, such as Adyen, which has a market capitalisation of €60bn, or PayPal, which is valued at almost $300bn.

Conor O’Kelly, chief executive of Ireland’s NTMA, said he was “very comfortable” investing in Stripe at a $95bn valuation, given how fast it was growing. “Even if they weren’t to do much further innovating — which of course they will be — they are already embedded in the largest secular trend of our time: the acceleration of digitisation and the growth of digital commerce,” he said.

Increasing the GDP of the internet

In a sign of strong investor appetite, Stripe has held talks about a deal that would allow investors to purchase between $500m and $1bn worth of shares from existing shareholders at or near the same price as the recent financing, said people familiar with the discussions.

Stripe’s mission statement to “increase the GDP of the internet” is no less grandiose than Facebook’s scheme to connect everyone on the planet. But unlike social media apps or gig economy start-ups, Stripe operates in an intensely regulated industry where Silicon Valley’s “move fast and break things” approach cannot apply.

There are two aspects to Stripe’s business model that got investors excited. One is the fundamental infrastructure of payments processing, for which Stripe typically takes a fee of roughly 2.9 per cent of each transaction — or 1.9 per cent in Europe, where card fees are typically lower.

Stripe’s is not the cheapest rate available but key to its appeal is speed and simplicity of integration, especially for the small businesses and start-ups upon whom it built its business.

“There was a lot of white space for small companies who didn’t qualify for a merchant account,” said Dayna Ford, payments analyst at Gartner. “They didn’t have to take market share away from the large incumbents.” 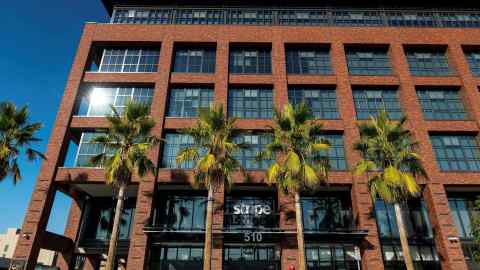 That core payments business is “self-sustaining”, said Suryadevara. “We don’t necessarily need to raise more money in order to grow that business.”

Suryadevara described the second part of Stripe’s business as “building for platforms” — launching additional services that can save meaningful amounts of money at a large scale or for which Stripe’s customers can charge their own users extra, bringing in new revenue streams.

One new Stripe customer, Matchesfashion, initially switched because its technology was easier to use. But the London-based luxury retailer also sells high-priced items to buyers in more than 170 countries — creating exactly the kind of cross-border transaction that bank systems can mistakenly block.

Nicolas Pickaerts, vice-president of global development at Matchesfashion, said Stripe had increased its acceptance rate — the frequency with which purchases successfully go through — by about 2 percentage points. “Given the size of our business, it’s worth a lot of money,” he said.

To introduce more new products, and expand its geographic coverage, Suryadevara said, Stripe is “investing like crazy in 2021, with an eye towards the next decade”.

But others now spy the same opportunity to join up the world’s fragmented payment systems. “Taking a credit card payment has gotten a lot more competitive because it’s been commoditised,” said Lily Varon, payments analyst at Forrester.

To expand beyond its core market of small businesses, Stripe has to beat back competition not only from more traditional payments companies such as Global Payments, Worldpay and Fiserv but also other next-generation companies, including PayPal, Adyen, Checkout.com and a growing swarm of smaller start-ups looking for a piece of a multitrillion-dollar market.

Guillaume Pousaz, chief executive of London-based Checkout.com, said in a January interview that he expected his company’s payments volume to more than double this year after tripling in 2020. He said net revenues roughly doubled last year, thanks to an international footprint that supports more currencies than Stripe.

“Our moat has always been built around actually having all these licences all around the world,” Pousaz said.

Collison insisted Stripe is also expanding rapidly into Europe, Asia and Latin America, attracting larger corporate clients such as Facebook’s Instagram and software provider Atlassian. He cited 50 customers who process more than $1bn a year in payments as evidence that it has made “tonnes and tonnes of progress in the enterprise segment”. “One of the things we’re very focused on is being able to serve customers all across the size range,” he said.

John Doran, general partner at venture capital firm TCV, which has backed payments companies including Revolut and Amsterdam-based Mollie, predicts Stripe will find it harder to grow in Europe than it did in the US. “Given the size and fragmented nature of the European payments market . . . we believe there is space for multiple winners,” he said.

While its rivals may be able to highlight support for a greater number of countries, payment types or even cryptocurrencies, Collison argued that Stripe’s ability to defend its business from its rivals is driven not by any specific product or feature, but an outlook.

He referred to the “global perspective” of a Silicon Valley company founded by two young Irish immigrants and its ability to plan five or 10 years ahead. “The [payments] infrastructure is global and you have to have a long-term mindset,” he said.