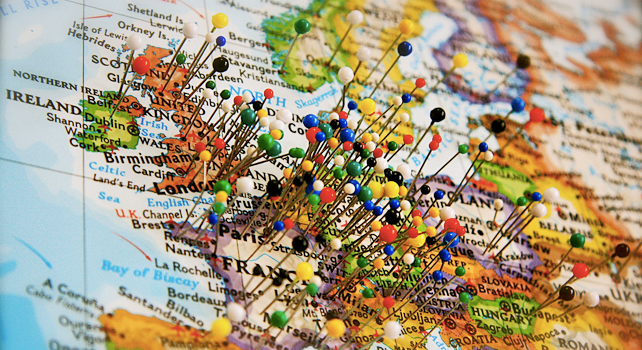 Silicon Valley, a geographically ill-defined zone in the southern part of San Francisco’s Bay Area, was first named so in the early 1970s. The catchy moniker didn’t really take off, however, until the 1980s when IBM’s PC jump-started the real consumer and business computing industry. Home to many world-famous high-tech firms today, the Valley’s history is tied up with the innovation of the semiconductor transistor, silicon chips, the early Net infrastructures, research at Stanford University, Xeroc PARC, and big corporate names like HP and Bell Labs. Now it is of course legendary–and of increasing international interest.

But it’s not the only place where pedal-to-the-metal innovation happens every day. Many tech hubs in Europe have flourished, and continue to flourish. Just this week, in fact, Amazon purchased an 8-floor, 47,000 square-foot office in London to develop its digital TV streaming service abroad. For our first installment in this series, here’s a look at three hot tech hoods on the continent.

Silicon Roundabout and Tech City are London’s hottest tech hub zones–and they’re all over the news right now because of Amazon’s move. The Roundabout is a relatively small concentration of high-tech firms centering on Old St. Roundabout. In January of 2010 Wired reported that there were 85 new startups housed here alone. TweetDeck and SongKick are two of the names you’ve likely heard that got their start here. After focussed interest by Prime minister David Cameron, and central investment, the Roundabout area was expanded into a larger “Tech City,” which had its own officially-appointed entrepreneur manager, and around 200 firms had homes here in 2011. Facebook, Google, Cisco and Qualcomm have placed some operations in the area. Google, in fact, recently opened a new campus there–it’s a seven-story building dedicated to housing and helping startups.

While it attracts much praise, controversy over the area’s actual success–as seen in this post from The Kernel–has recently afflicted the entire enterprise, and its CEO has left.

Silicon Fen is a small area around Cambridge that captured 8% of all EU venture capital spending in 2004. It leverages the world-leading scientific expertise of Cambridge University, low local cost of living and relatively easy access to London, and has been home to notable tech firms such as ARM and Sinclair Research (innovators of early digital watches and pocket calculators, and pivotal in the early home computing game).

Silicon corridor, also known as the M4 corridor may be Britain’s earliest version of Silicon Valley. Stretching along the M4 motorway and parallel main-line railway that connects London to South Wales with a notable junction at the city of Bristol (where it has an offshoot in Silicon Gorge), the area has long been home to tech companies and startups of all flavors and scales. Not all parts of the Corridor are high-tech, and there are hotspots in cities like Bristol, Bath, Cardiff, Reading. Specific government injections of cash have seen international names like Nokia, Cisco, Microsoft, Oracle and Ericsson build offices and research facilities here.

Giant cell phone network Orange, originally a UK firm, had its headquarters here. Near the Eastern end of the area is Farnborough–historic home of early aviation, the world-famous trade air show and still a hotbed of aircraft and military tech research. The Telegraph profiled the area and pointed out that consumer firms like Tweetmeme launched in the Corridor alongside innovative super-high-tech firms like picoChip, which is the “world’s leading supplier of Femtocell technology,” key to mobile 3G sharing and owning an 85% market share and a global footprint.

Dublin is increasingly earning the nickname of “Europe’s Silicon Valley.” The Irish Times noted in 2011 that Twitter’s decision to locate its third international office in the city in the docklands area of the city resulted in the zone being called Silicon Docks. In early 2011 Google bought the tallest building in the city, the 15-floor Montevetro building, for $136 million as its earlier local office was too small for its growing staff.

In March a deal between companies in Dublin’s cleantech cluster The Green Way and in Silicon Valley was announced, and is expected to lead to significant new investment in research and innovation in the sector, resulting in up to 20,000 extra jobs by the end of 2015. In June Nuance Communications, the firm behind the voice-recognition tech in systems like Apple’s Siri digital assistant, revealed it was planning an international office in Dublin, leveraging the cosmopolitan and tech-savvy workforce that Dublin is fostering.

Berlin was a hotbed of startup culture in the early 2000s, but enthusiasm was dampened in the dotcom bust. It’s recently begun thriving though, so much so that in late 2011 the New York Times ran a long piece about the boom of tech in the city. SoundCloud is perhaps the biggest name you know that has sprung from Berlin’s new startup scene, but there are others like Wooga–Europe’s equivalent of Zynga–and Betterplace, an online route for donating to charity, that are seeing plenty of success. As BusinessWeek notes, a Thomson-Reuters survey in 2011 found that 103 German Net startups, most of which are Berlin-based, received venture capital from global operators. That was more that year than any nation apart from China and the U.S.

Germany is Europe’s biggest economy, which aids Berlin’s startup scene, though traditional German risk-aversion in business may be an issue. Writing about the tech scene in Berlin, CNBC magazine referred to it as the coolest city in Europe, which definitely helps add to the mood of modernity and high-tech friendliness, and noted that the country’s reunification efforts have resulted in Berlin having plenty of empty buildings and unusually low ground-rents when compared to cities like London. The city is attracting attention from big-name venture capitalists from around the world, and the Samwer Brother’s new vehicle Rocket Incubator has launched over 100 new firms from the city. And in April local venture capital firm Earlybird revealed that it had amassed $100 million for a new investment fund, and planned to double that by the end of 2012.

Chat about this news with Kit Eaton on Twitter and Fast Company too.