Silicon Valley is the 73rd Character in Head Soccer. He was added in Update 6.0, along with The Philippines, Senegal and Bolivia. He is also a 5 Star opponent in Arcade.

Silicon Valley plays defensively, going to his goal after the kick off.

He has brown hair, his eyes are closed and he has a large smile. 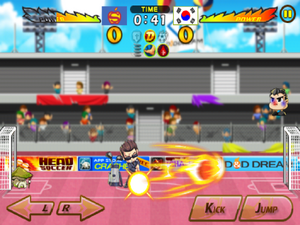 He yells “IRON SHOT!” and then he throws his golf club into the air and catches it. The first and second hits start from low to middle height, so they hit right into the opponent. The third hit goes from low to high so it aims to the top of the goal. If a cutscene appears, then he will only do two hits, and then charge up to the opponent and hit them out of the court into a nearby building. However, before he does the hits, he will explode, making the other player unconscious and blowing him/her on top of his goal. This Power Shot lasts between 5 and 6 seconds, depending of the cutscene. 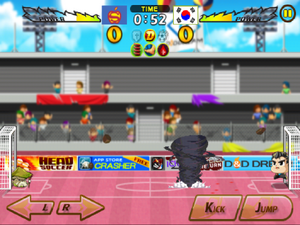 He forms as a tornado with his golf club, first hits with the tornado right on the face of the opponent, second hits with the tornado aims right on the face and the head pops out as he hits the head onto the hole in one. When a cutscene appears, he will not hit the opponent’s head, but rather smash them out of the top of the stadium. The power shot will last 4 or 5 seconds, depending on the cutscene.

He dashes to the opponent and whacks him/her through the side of the stadium (just like The Philippines). His counter attack lasts for 1 second. 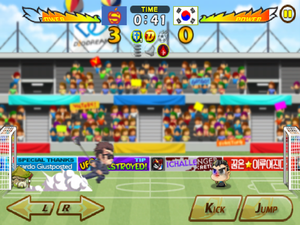 Silicon Valley doesn’t wear a standard Costume. However, in Fight Mode, he seems to be able to play with any random S or SS rank costume. He also has a pet that plays alongside him, and he wears a body, both in Arcade and Tournament, but these are always different. 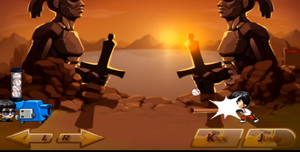 In his air shot, the first two balls are easy to block, but jump for the third one, it goes higher.

To unlock him, you will have to train and memorize their speed, and trajectory:

2nd, 3rd, 8th and 9th balls are easy, they are at normal speed in a straight line. 1st and 7th will be faster.

The 4th ball has a trajectory similar to Brazil’s Power Shot, you will need luck and practice to hit it, because it is the hardest one. One trick is to swing your bat late, not before the ball descends to an appropriate height for you to hit, but also not too late. The best position would be around the edge of the shadow of the right sword. You can also spam-swing, but then the 4th ball is luck-based. (Some pictures available in the collage)

5th ball is actually following a zig zag line, so be careful to not hit too late, or too early. Try to hit at about the 3rd bounce.

Finally, 6th and 10th ball will stop in the middle of their trajectory, 6th for 1s, and 10th for around 3s.

If you fail to hit a ball, quit the game with multi-tasking before the whistle in the end and come back, you will start again, no matter how many times you failed before.