Few places in the world have been romanticised to longer lengths than a former fruit-growing region now known as Silicon Valley.

The region, also known as Santa Clara Valley, was given its nickname by a 1971 Electronics Magazine article, owing to the large quantities of silicon being used to make semiconductor chips.

For the better part of the last 100 years, this ever-expanding region in Northern California has had a hugely disproportionate impact on how modern humans communicate, interact, work and live.

Some of Silicon Valley’s most famous innovations include:

Cities around the world – from Tel Aviv to Tallinn and from Bangalore to London – have attempted to set up copycat innovation hubs by replicating the Valley’s DNA.

These have had various degrees of success, with commentators arguing that a clone with the same scale of power, productivity and influence is not possible.

This is probably the correct assessment, because the history of Silicon Valley is a history of relationships – both accidental and intentional – between academic institutions, venture funds, accelerators, support facilities, a willing government, as well as thousands of bright minds.

We will explore the chronology and complex interdependence of these relationships in the pages below.

The Emergence Of Santa Clara University

Silicon Valley’s entrepreneurial spirit can be traced back to the earliest days of European settlement in California, where a Spanish priest named Junipero Serra built a series of missions, with the first established in San Diego.

Each mission spawned a small ecosystem of small businesses; these formed the first centres of commerce in early California.

The eighth mission was built in the valley of Santa Clara. Interestingly, it was the first to be named after a female saint, owing to its beauty and agricultural bounty.

When California became a state in 1848, the mission fell into the hands of the Jesuits, who transformed it into California’s first learning institution, Santa Clara University, in 1851.

The Emergence Of Stanford University

Leland Stanford was a leading entrepreneur of the 19th century, embarking on a series of failed ventures before finally making his fortune in railroads.

His defining achievement (aside from commissioning the first movie ever made) is building the railroad that connected the east and west of the United States for the first time.

After purchasing an 8,000-acre property in Santa Clara Valley, his only child died at the age of 15. In tribute, Stanford and his wife turned the land into Stanford University in 1891.

Notably – and in stark contrast with cultural norms of the time – the institution admitted both men and women.

As the region’s key academic and research institutions, Stanford University and Santa Clara University have played a key role in the evolution and ongoing success of Silicon Valley.

The Significance Of The Vacuum Tube Amplifier

The invention of the telegraph revolutionised communication in the 19th century. The US’ leading telegraph company of the time, The Federal Telegraph Company, opened a research facility in Palo Alto, inventing the vacuum tube amplifier.

The device made long distance phone calls possible for the first time. At the 1915 World’s Fair, the company showcased this capability, making the world’s first intercontinental phone call from San Francisco to New York.

Due to its ability to control the flow of electrons, the vacuum tube amplifier created a new discipline called ‘electron-ics’. Both Santa Clara University and Stanford University created courses within their schools of engineering, devoted to the study of this new field.

Frederick Terman, a professor of Stanford University’s program, set a key precedent by encouraging his students to create their own companies in the area, and even personally invested in some of them.

The most famous of his students are Bill Hewlett and Dave Packard, who went on to form HP.

Their first product, the HP200A, was manufactured in Packard’s garage in Palo Alto; it was a low-distortion audio oscillator used for testing sound equipment. Seven of these devices were purchased by their first customer, Disney, that used the product in the making of the film Fantasia.

The Controversy Of Fairchild Semiconductor

After winning the Nobel Prize for Physics for inventing the transistor, William Shockley established Shockley Semiconductor in Santa Clara Valley.

A transistor represented a leap in the electronics field, able to do everything a vacuum tube could do, but was smaller, faster and cheaper.

Shockley was able to attract some of the brightest PhD graduates from around the country to his new company, including Julius Blank, Victor Grinich, Eugene Kleiner, Jay Last, Gordon Moore, Robert Noyce and Sheldon Roberts. However, Shockley’s authoritarian management style and futile research focus soon prompted a revolt and, when the team’s demand that Shockley be replaced was turned down, they left to establish a rival start-up.

Famously, the eight each signed a dollar bill to symbolise their commitment to the new partnership.

After signing an agreement with businessman and investor Sherman Fairchild, the eight established Fairchild Semiconductor, creating a business that lay the groundwork for Silicon Valley’s dominance in the technology sector and a blueprint for an environment of innovation and disruption.

As fast as Fairchild grew, employees left at an equally rapid pace to launch spin-off businesses. The most notable of these was Intel. In just over a decade, 30+ other spin-offs had launched, fuelling funding for many more. Alarmed at the rate of attrition, the company began to focus on enhancing the employee experience in a bid to retain talent, a trend that continues to this day.

Today, at least 92 publicly traded companies with a combined market capitalisation of over $2TN can be traced back to the original Fairchild Semiconductor founders.

The Influence Of Venture Capital Firms

Eugene Kleiner left the Fairchild Semiconductors to form Kleiner Perkins, a venture capital firm. Kleiner decided to base his new company at the exit of a new highway, halfway between San Jose and San Francisco.

The exit, called Sand Hill Road, now has the highest density of venture capital firms in the world, and Kleiner Perkins went on to fund 800 companies including Amazon, Google, Skype, Spotify, SnapChat and Electronic Arts.

The Rebellion Of Apple Computers

In the 1970s, Bill Hewlett received a call from a high school student, requesting spare parts for a frequency counter he was building. Impressed by the student’s initiative, Hewlett offered him a summer job on the assembly line at HP.

The student’s name was Steve Jobs.

When Apple launched its IPO on December 12, 1980, it made around 300 employees instant millionaires – more than another other company in history.

Steve Jobs’ and Steve Wozniak’s ability to not only realize this vision but realize it on a scale that spilled over from PCs to the iPod, iPad and iPhone, lies at the heart of Silicon Valley’s enduring mystique.

READ MORE: Charting the history of the iPhone jailbreaking community

The Emergence Of The Internet

In its infancy, the internet was a text-based system, indecipherable to most people until Marc Andreessen of Switzerland overlaid it with a clickable, graphic user interface.

On the urging of a Stanford engineering professor called Jim Clark, Andreessen launched Netscape, listing the company in 1995 with a market capitalization of nearly $3BN.

The internet not only fundamentally changed nearly all aspects of our lives, but spawned a new generation of Silicon Valley technology companies that went on to wield a staggering amount of influence, power and value within a relatively short space of time.

The War For Jobs In Silicon Valley

The Valley’s growing reputation as the tech capital of the world, as well as its heavy emphasis on employee perks, quickly established it as one of the globe’s most competitive job search environments.

Predictably, software engineering has consistently dominated the list of most in-demand jobs since early 2000’s, with product managers and data scientists also stealing top spots in 2019: 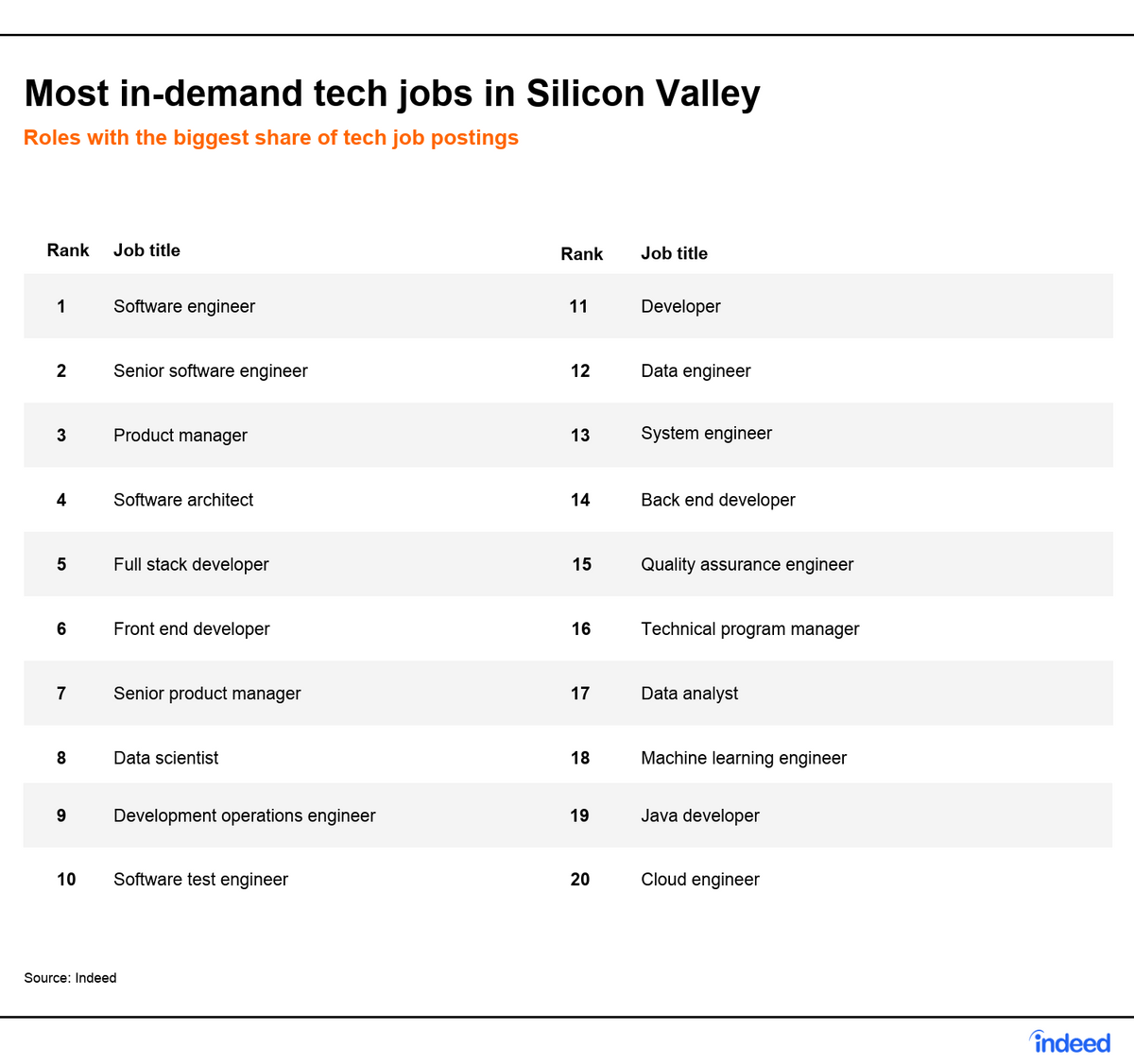 Incidentally, the influx of top talent also led to a steady rise in living costs across recent decades, with San Francisco Bay Area being named the most expensive US region in 2019.

The increased use of tools and services such as interview coaching, resume writing services, and personal branding to secure one of these prestigious positions has all but guaranteed this trend will continue.

This won’t come as a surprise to many. Very few people since the 19th century have settled in the Valley to simply bask in the sun.

The history of Silicon Valley is, in effect, the history of young, ambitious (mostly geeky and male) people deciding to test themselves, their skills and ideas in the world’s most demanding technology ecosystem.

Since the turn of the century, Silicon Valley’s influence has spilled out into the mainstream corporate culture, reshaping our work environments, as well as attitudes to work.

These ideas were intended to liberate employees from traditional attitudes to, and modes of, work. Whether they did – or whether they created an illusion of meaningful perks at the expense of our personal freedom – is still being hotly debated.

The Future Of Silicon Valley

The history of Silicon Valley cannot be complete without a brief glimpse into its future.

The Valley isn’t just a region; it’s an idea. Since the days of the vacuum tube amplifier, it has been a byword for innovation and ingenuity.

However, the Valley’s legend also has a dark side, and for this reason pundits have argued that the region’s primacy as technology hub is on the wane.

To support their assertions, they point to Chinese companies, which have been growing faster, with higher valuations and with more users than their Silicon Valley-made counterparts.

They also point to the Valley’s many recent failures, busts, and promises unfulfilled. Uber and WeWork combined, for example, have lost more than $10 billion since 2019 began.

While these examples may be outliers, their theme contains a message. There’s a humility in realising that Silicon Valley is, in most ways, an accident of history. It’s a technological empire and – like all empires – it has a beginning and it will have an end.

Future generations will one day study the history of Silicon Valley with a mix of bemusement and nostalgia, in the same way we feel about Italy when we get told that, once upon a time, it was the Great Roman Empire.

On that note, we’ll leave you with words Bugs Bunny:

“Don’t take life too seriously. You’ll never get out alive.”

Read More: Who invented the internet?

Read More: The Invention of Film