His costume is eye-catching — and that’s exactly the point.

Standing 6 feet 3 inches tall, he can’t help but capture attention as he walks through downtown San Jose just before sunset, wearing a billowing black cape and pulling a small folding wagon. People call to him from all directions as he passes. 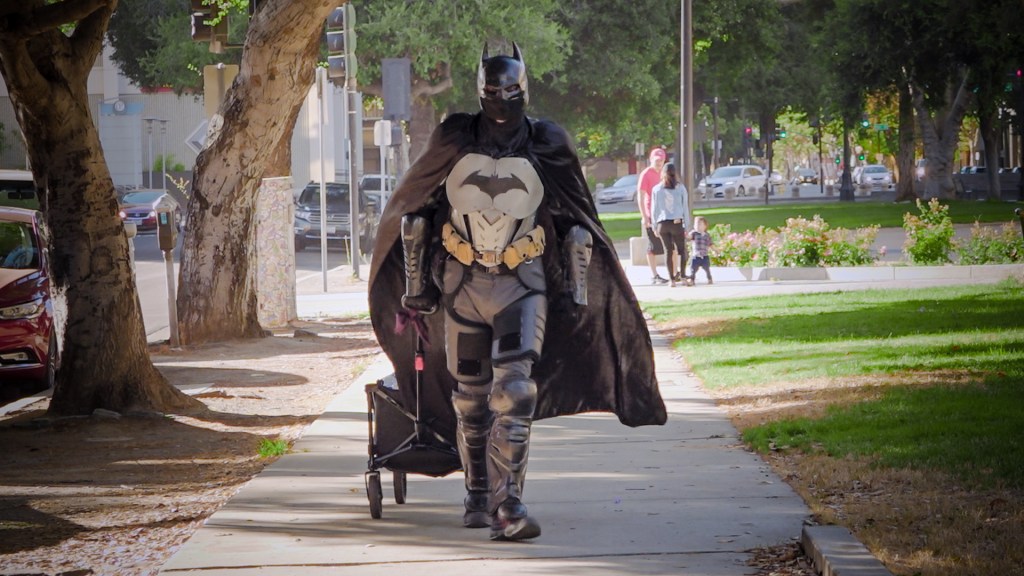 Batman of San Jose is hard to miss, at 6 feet 3 inches tall plus a few extra inches for the ears. Over the summer, he became a fixture most evenings in downtown San Jose, pulling a small wagon full of food, water and other supplies for those in need.

“All right, Batman!” a woman cheers from her car window.

“Batman!” exclaims a group of young people eating at a cafe.

“Superman!” calls a man riding past on a bicycle.

Though he waves and says hi to all his fans, and poses for pictures with many who ask, he ultimately hurries on, eager to find the people he’s really here to see. They could be asleep in doorways, panhandling at bus stops, or pitching tents in a park. 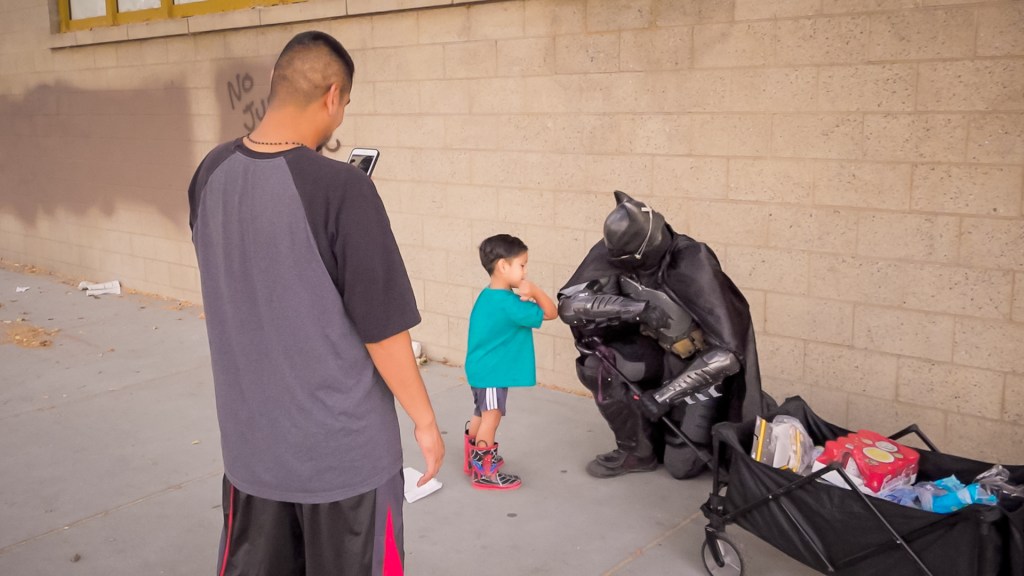 Fans big and small stop Batman of San Jose on the sidewalk to ask for pictures. Here, he exchanges an elbow bump with a boy who told his father he wanted to meet the superhero.

“People ignore people out on the street,” he said. “So I figured I’d draw as much attention as possible to the issue — and, well, this is pretty attention-grabbing.”

The 19-year-old, who prefers to be known only as Batman of San Jose, said he began paying visits to his unhoused neighbors after repeatedly seeing them on his way to and from school and wishing he could do more. He started by asking them what they needed — and quickly returned with four items: food, water, blankets and socks. 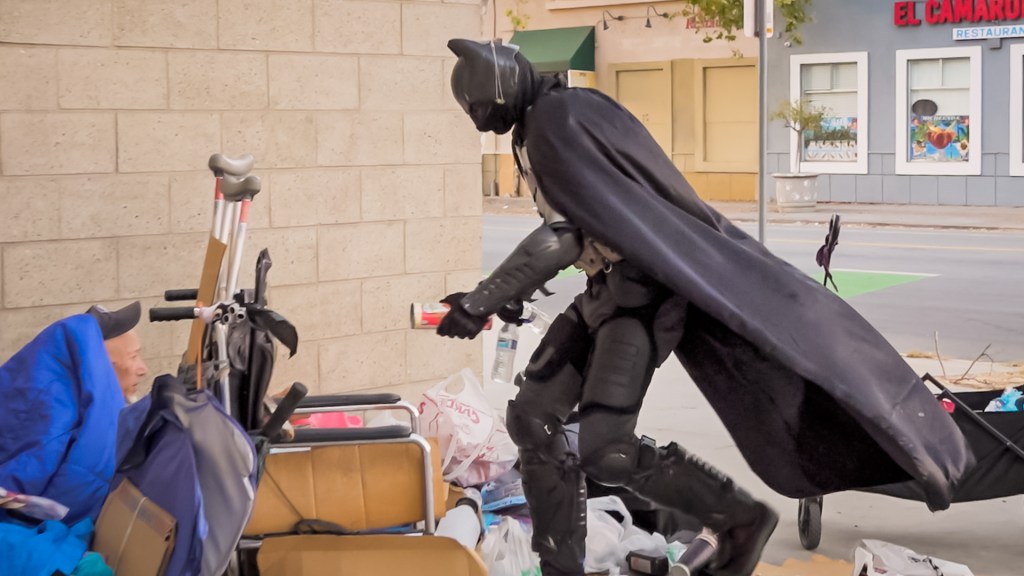 Weaving through alleys and side streets, Batman of San Jose tries to find people preparing to sleep for the night, and offers them water, blankets, socks and canned food — always with pull tabs, he says, so they don’t need a can opener.

“Long, dark-colored socks are the best,” he said. “‘Cause they’re gonna get dirty.”

The supply wagon, which Batman says costs about $25 per day to keep full, is restocked mostly through small donations he receives online as a result of his growing social media following. On some nights, he brings hot meals to places where he knows those without housing are likely to congregate, and serves them up cafeteria-style — with disposable gloves and individually-wrapped utensils for safety, he’s quick to point out.

But there’s another thing this young Batman brings with him — and it doesn’t take up any room in the wagon at all. 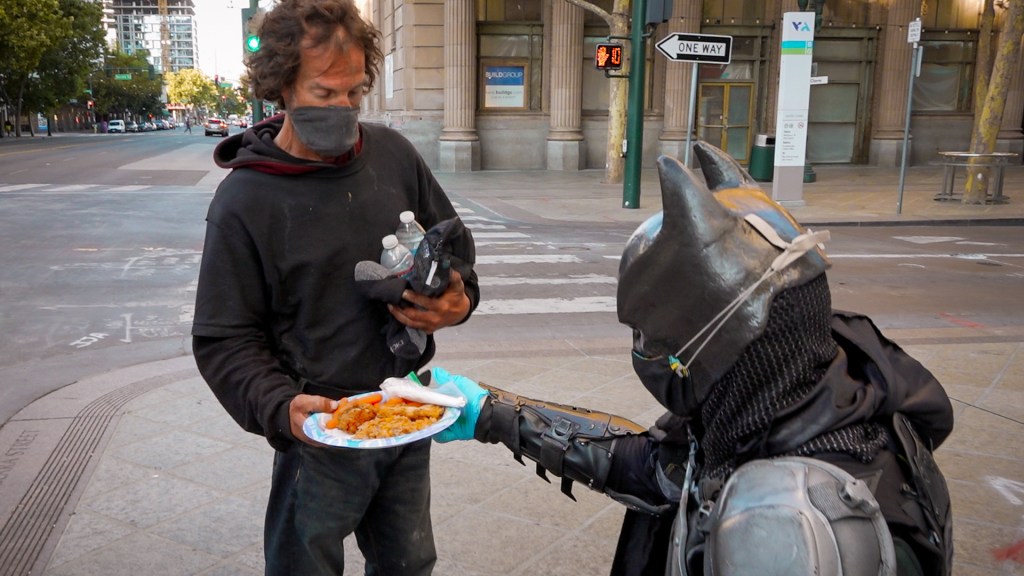 When possible, Batman of San Jose works with a friend to prepare hot meals he can distribute in and around the parks of downtown San Jose. Here, he hands a plate of baked beans and fried chicken to a man who had also requested bottled water and socks.

“One of my main goals is conversation,” he said. “Conversation is so important, because being on the street dehumanizes you. You are just ignored by people.”

In fact, he adds that the Batman costume — built by hand and constantly evolving — is a key ingredient in starting that conversation.

“They greet you like they know who you are,” he said. “And it makes people a lot more comfortable.”

“I want people to focus on the problem, not on me,” he said. “I could be literally anybody.” 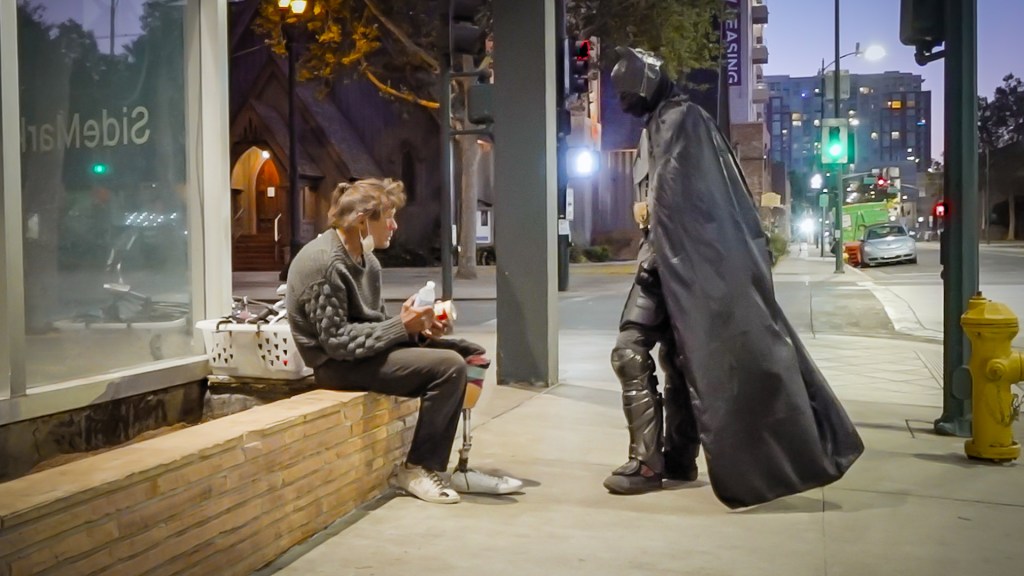 Batman of San Jose said the fifth and most important thing he brings out on the streets — besides food, water, blankets and socks — is conversation. Here, he listens to the story of a man who said he’s been a lifelong San Jose resident, except for the years he spent in the U.S. Navy.

Over a period of several months, Batman said he’s made friends and acquaintances — both among the people he visits with supplies, and among others in the neighborhood who are also quietly helping out.

“He stepped out of the shadows, and I said, ‘Oh my God, it’s Batman!'” said Nikhil Bhatnagar, an immigration attorney who encountered the teenage hero in full costume one evening.

Bhatnagar had already made a practice of dropping off food to people he would often see living on the street as he went to and from work. As he puts it: “You can’t really call yourself a lawyer who’s for the people if you’re stepping over people on your way to work who literally haven’t eaten, you know?” 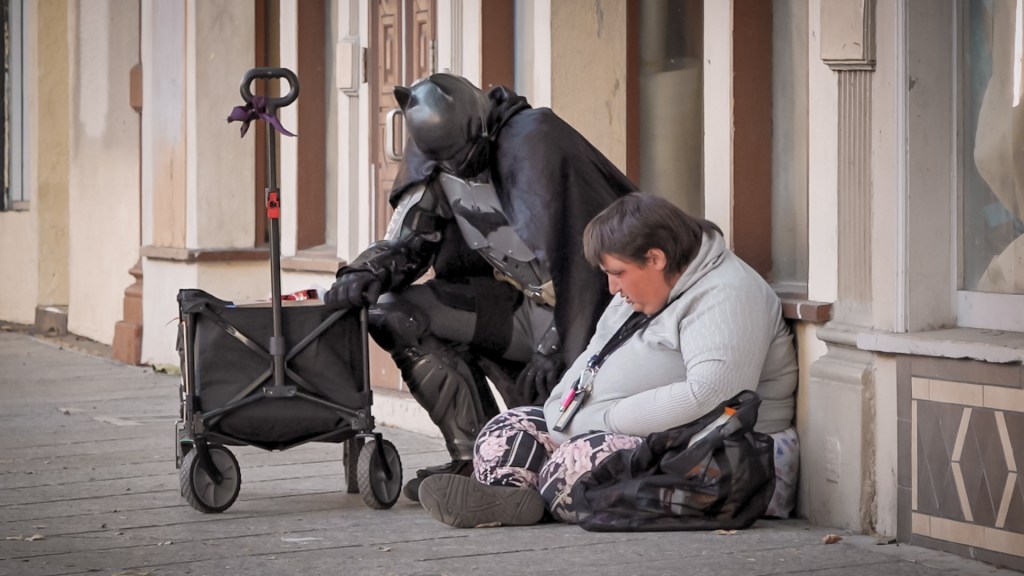 Batman of San Jose said he’s made friends and acquaintances during his evenings in downtown San Jose. Here, he checks in with Renee Sparks, who on this day told him she needed help running an errand and finding a bathroom.

Bhatnagar, who admitted his office began nicknaming him Robin after he befriended Batman, said he finds it both unfortunate and inspirational that in a year when San Jose is experiencing record homelessness, a masked man in a cape has swooped in to help the city’s most vulnerable people.

“I do a lot of work with marginalized communities,” Bhatnagar said. “They get pushed into the shadows, they get forgotten about, and they get treated pretty hostilely. And it was nice to see a superhero literally coming to their defense.”

And yet, one hero, no matter how super, can’t solve homelessness alone. Batman is hoping to garner attention — and action — from community leaders, and also from other individuals looking to make a difference.

In fact, there may be no better proof of that statement than another teen who’s appeared on Silicon Valley streets, as well as on social media. At 18 years old, and also a recent high school graduate, he calls himself Spider-Man of Cupertino. 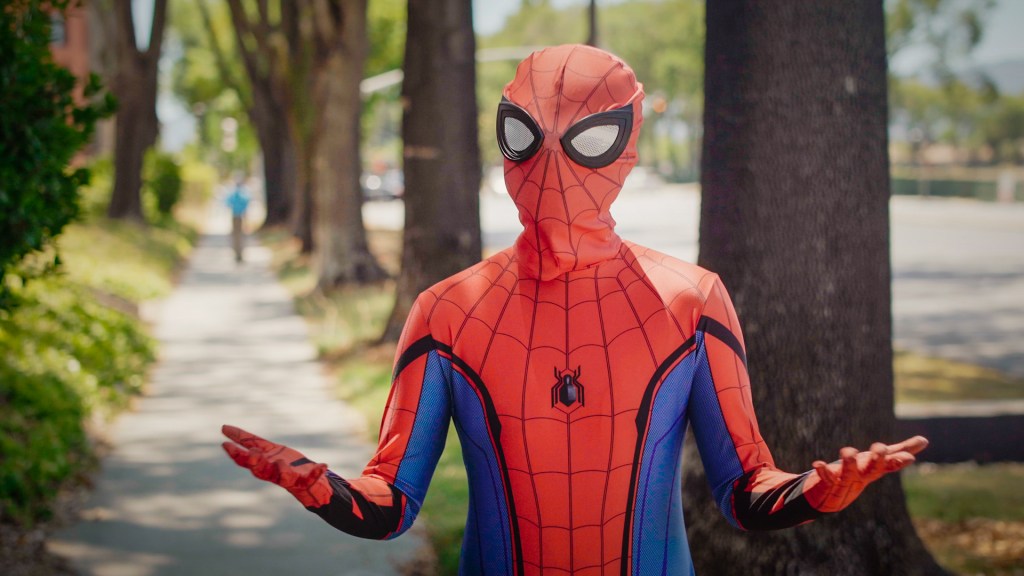 Spider-Man of Cupertino is 18 years old, and says Batman of San Jose directly inspired him to head out into the streets and befriend his unhoused neighbors.

“I got inspired by his work,” he said of the teenage Batman. “Anybody can be a superhero. Anybody can put on a mask. Anybody can go out and talk to somebody.”

Also choosing to remain anonymous, Spider-Man travels by bicycle and visits his unhoused neighbors while wearing a three-layer mask that covers his entire head and even has prescription lenses built in. He arrives at Cupertino’s largest cluster of tents around lunchtime, and jots down requests on a notepad.

“Is there anything I can get you?” he asked on his first stop. “Water? Ice?” 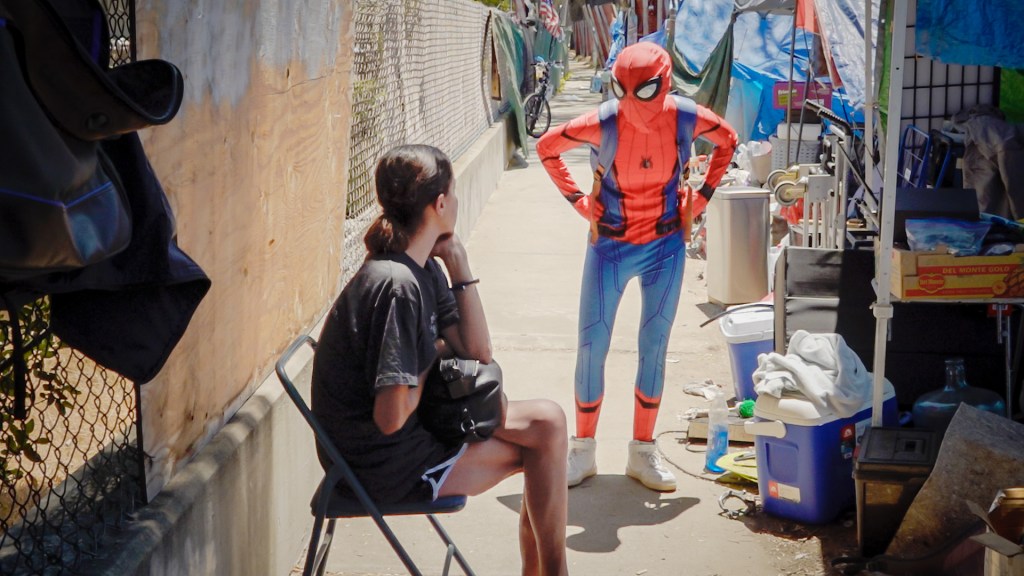 Spider-Man of Cupertino stands in one of the city’s largest tent clusters, on North Wolfe Road, taking grocery requests.

Like Batman, Spider-Man said he’s driven by a belief that people shouldn’t be defined by their lack of housing. He said he’s learned many of the people living in the tents he visits are lifelong Cupertino residents who’ve simply fallen on hard times. Some even graduated from Cupertino High School — his own alma mater.

Buried in that explanation was the answer to why he chose his specific superhero persona:

“The idea of the friendly neighborhood Spider-Man,” he said. “These are my neighbors — so, here I am.”

The two teen heroes agree: homelessness is a complex and worsening problem that won’t be solved overnight. 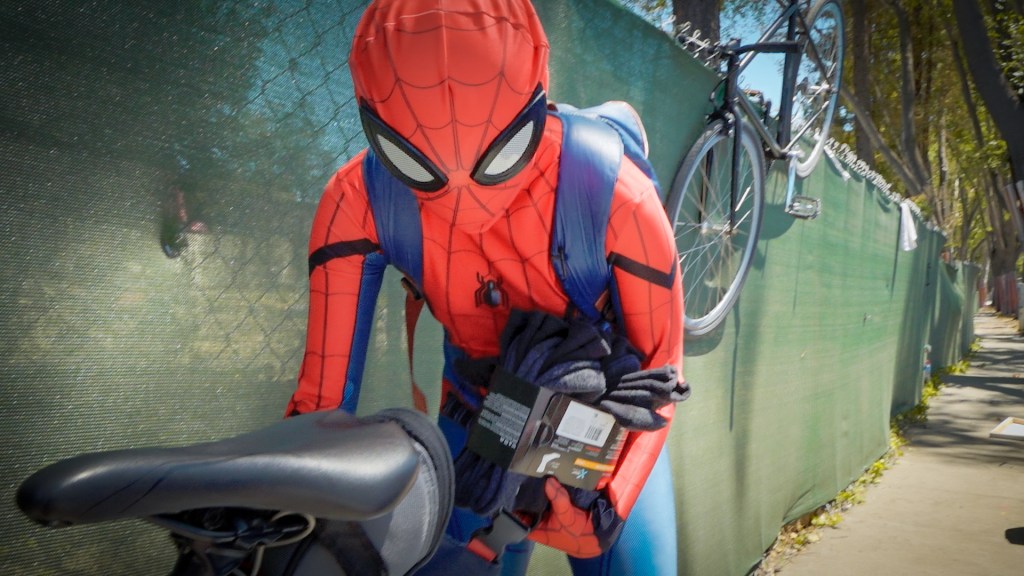 Unlike Batman of San Jose, who drives a car, Spider-Man of Cupertino delivers supplies to his unhoused neighbors by bicycle. Here, he returns from a shopping run with socks, water, ice and soda.

With sunlight rapidly disappearing, Batman packed up his empty food tins and serving utensils after a successful dinner in St. James Park. Instead of congratulating himself on a job well done, he remained preoccupied with the nagging thought that he might’ve missed someone — someone who now may go hungry.

Cupertino’s Spider-Man, who considers himself the first of Batman’s costume-clad followers, said he certainly hopes he won’t be the last.

“I see the impressive work that Batman has done, and I just want to spread that everywhere,” he said. “I personally hope it doesn’t stop with me.”

And Bhatnagar — who contends he would’ve rather been nicknamed Daredevil, but will happily accept Robin if it puts him in Batman’s company — said that he, too, hopes this is the start of a movement: One in which everyday people step into their superhero costumes — real or metaphorical — and head out on the streets to help their neighbors, changing society’s attitude toward homelessness one kind act at a time.