Emily Chang is an American journalist and host of the US TV show Bloomberg Technology. Her new book, Brotopia, is an exposé of Silicon Valley’s macho culture.

What is Brotopia?
It’s this idea that Silicon Valley is a modern utopia where anyone can change the world or make their own rules, if they are a man. But if you are a woman it is incomparably harder. And that shows in the numbers. Women-led companies get just 2% of venture capital funding. That is egregious, especially in an industry that prides itself on being a meritocracy where anyone can succeed. We need people of all backgrounds to be making these products, because people everywhere are using them.

How did men come to rule in Silicon Valley? You say it hasn’t always been like this.
Women were programming computers in the early days of the military and Nasa. Then, as the industry started to explode, these personality tests were developed to identify people who could be good at this job. And it was decided, though there is no evidence to support the idea, that good programmers “don’t like people”. Well, the research tells us if you hire people who don’t like people, you hire far more men than women. These tests perpetuated the stereotype of the antisocial, mostly white, male nerds who many of us think of when we think of computer programmers. That has also extended to entrepreneurs as well. Steve Jobs sort of proved a different kind of person could start an amazing company, but we created another stereotype of a swaggering, risk-taking bro instead, which also selected for men.

So what’s Brotopia like for the women who do inhabit it?
They are frustrated and tired of being the only women in the room, day after day. They are doing this sort of second job that men don’t have to do, which is prove that they deserve to be there. At the same time, they are fending off sexual advances because they are the only women in the room. The circumstances for female entrepreneurs are especially challenging. Most have not just one story to tell about bad behaviour or an unwanted advance, but several.

How does Silicon Valley compare with other sectors, such as Wall Street, which is also notoriously sexist?
I can’t tell you how many times, as I was interviewing for this book, people said to me: “Well, Silicon Valley can’t possibly be worse than Wall Street.” Well, it is. The gender imbalance is a lot bigger: the top banks are generally 50/50 when it comes to representation; in Silicon Valley, women hold 25% of jobs.

Isn’t the problem a “pipeline” one – there just aren’t the female computer science graduates coming through?
Silicon Valley created the pipeline problem by creating this very narrow idea of who can be good at the job. The industry [also] has a big retention problem – women are twice as likely to quit tech than men – and that is because it is so male-dominated and the culture is not inclusive. Unconscious bias is a huge problem.

The book details drug-fuelled sex parties where rich and powerful men invite women in two-to-one ratios, and “tech bros” attending strip clubs in the middle of the day. Indeed, you visit a strip club in the tech-heavy South of Market region of San Francisco. How extensive is this kind of behaviour and how does it hurt women in tech?
It depends on the circles you run in. For some, the [sex party] scene feels ever-present and I spoke to a number of women who either left the country or moved to New York because they didn’t feel comfortable. I spoke to [female] engineers at Uber who said they were invited to strip clubs and bondage clubs in the middle of the day. It is putting women in very uncomfortable situations where they feel sort of damned if they do and damned if they don’t. Because so much business is happening outside the office, if they want access to those opportunities, they feel like they have to participate. The bottom line is there shouldn’t be a “cuddle puddle” at a company party.

What possible format could a sex party have in Silicon Valley that would be OK?
There are plenty of sex parties where there are very strict rules around consent, alcohol and gender ratios. The Bay Area has had a long tradition of sexual exploration, sexual liberation and sex positivity. But these events [I report on] are a lot more about power than about sexual exploration and it is a power dynamic that is completely lopsided.

Google used to have a better representation of women, but now it’s no better than average, with 20% of women in tech roles. What went wrong?
Google founders Larry Page and Sergey Brin really focused on hiring and promoting women in the early days. And they got some incredible women – Susan Wojcicki, Sheryl Sandberg and Marissa Mayer – who made incredible contributions to the company [Wojcicki is now CEO of YouTube; Sandberg COO of Facebook; and Mayer stepped down as CEO of Yahoo last year]. But over time, Google lost focus. It began exploding in size, became focused on getting people in the seats as fast as possible and defaulted to all of the same hiring and recruiting strategies that other companies use.

What role has Silicon Valley played in the #MeToo movement?
I think women in Silicon Valley were pioneering in having the courage to come forward and they deserve a lot of credit for helping women summon their collective courage. It started with Ellen Pao [a former junior partner at venture capital firm Kleiner Perkins, who sued for gender discrimination in 2012]. She lost in court but won in the court of public opinion. Then Susan Fowler came forward and that catalysed several women in tech to come forward about investors.

What happens to the men in Silicon Valley who leave following revelations of sexual harassment? Are they landing on their feet?
I think it is too early to tell. We, as a society, need to think about what we are OK with when it comes to a next act. When are we ready to forgive? I don’t know the answer to that question.

There are so many problems – where do you start to fix things? And can Silicon Valley ever really change?
I am hopeful. I believe that the same people who changed the world can change this too. They can hire women and pay them fairly. I look into a company called Slack, where the CEO has made hiring and promoting women a specific priority. Slack has focused on giving people the tools to combat their own bias, it has diversified its recruiting teams, it asks employees for diverse referrals, it has built structured reviews and feedback systems and it has done a comprehensive pay review. It is showing in the numbers – about 43.5% women.

Aside from not harassing women, what can individual men in Silicon Valley do to make things better?
Men need to listen and be advocates. It has been interesting on my book tour: half the audience feel so validated and grateful that someone is finally speaking for them, while half are completely in disbelief. For so long, women have been living this every day and men have been ignorant of it and blind to it. I don’t think there are always bad intentions there, but I do think that at a certain point ignorance becomes wilful. 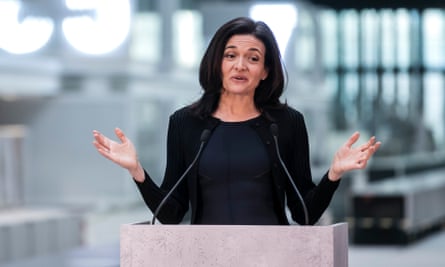 Sheryl Sandberg, COO of Facebook, has spoken recently of her experiences of sexual harassment in the tech industry. Photograph: Vincent Isore/IP3/Getty Images

February 2017
Computer engineer Susan Fowler publishes a blog post about her experience of sexual harassment at her former company, Uber, prompting an investigation into its culture. Waves of customers delete the Uber app and an exodus of its executives, some because of inappropriate conduct, begins.

July 2017
Dave McClure of tech accelerator 500 Startups resigns after the New York Times publishes the accounts of a number of tech industry women who were sexually harassed by male investors, including McClure and Chris Sacca of Lowercase Capital.

November 2017
Venture capitalist Steve Jurvetson leaves Draper Fisher Jurvetson, the firm he cofounded, amid an investigation into sexual misconduct, which he denies.