The big Silicon Valley tech companies have a reputation for minting millionaires. Not everyone is Mark Zuckerberg, of course, but even the average employee is bringing in a salary that would make most of America jealous, according to a new study out by PayScale.

Ten years into their job, which is how PayScale defines “mid-career,” employees at the biggest tech companies in the country easily make more than $100,000, or more than twice the average American household income, which is just over $50,000. At places like Google and Facebook, the median employee is making six figures less than five years into her career.

The best company to work for in the beginning of a tech career based on this pay data is Facebook, which pays people with less than five years experience $116,800 at the median. After 10 years of experience, it pays more to work at LinkedIn, which pays mid-career employees a median of $159,600.

Here’s how salaries break down by company, according to PayScale: 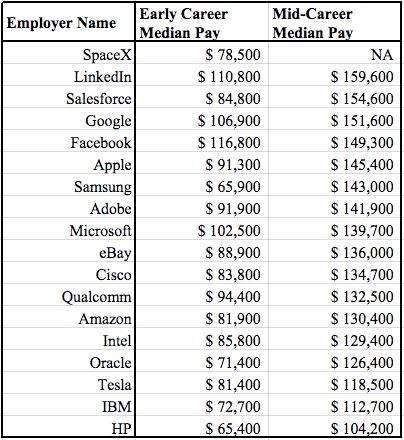 There are a couple important caveats to these numbers: First, it’s very expensive to live in the Bay Area. Tech companies know that, and pay accordingly to attract and retain talent — which is not to say their employees aren’t still very well off. The second thing to note is that most of the support staff at these companies aren’t actually employed by the companies they work for, but are subcontractors. So the salaries of cafeteria workers, janitors and security guards at these companies aren’t included in these figures. Their salaries, by all accounts, are much lower.