Who are the ‘Silicon Valley’ characters based on? – Business Insider

HBO’s “Silicon Valley” gives a whirlwind tour of the triumphs, debauchery, and epic fails of the real tech world. It’s a show so spot-on, Snap CEO Evan Spiegel once called it “basically a documentary.”

In an interview with INSIDER in 2017, “Silicon Valley” showrunner Alec Berg said the writers find inspiration for the series’ storylines in real events and people.

As season five ramps up, we set out to create the definitive, person-to-person mapping of “Silicon Valley” characters to tech-world personalities. Our guide was largely inspired by a blog post from superfan and tech consultant Rex Sorgatz, which you can read here.

Study up before the next episode of “Silicon Valley” on Sunday night.

Richard Hendricks is the classic Silicon Valley wunderkind who codes his way to the top. 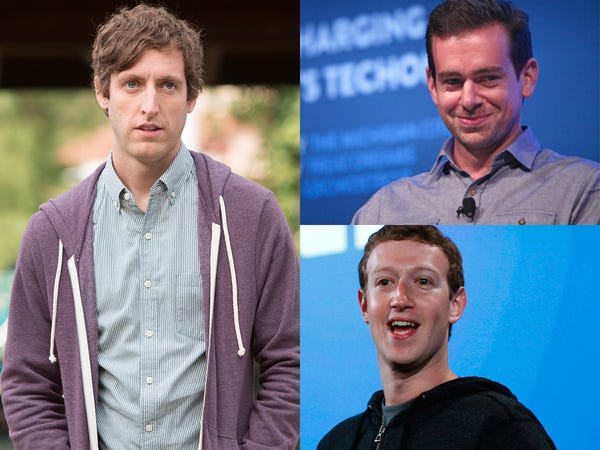 His devil-may-care tousled locks and frenetic personality remind us of Facebook’s Mark Zuckerberg, while his story arc mimics the rhythmic highs and lows of Twitter CEO Jack Dorsey’s career. Twitter ousted Dorsey in 2008, but he later reclaimed the CEO title.

Richard also bears a striking resemblance to the CEO of Quora, Adam D’Angelo, as some contributors on the site have pointed out. 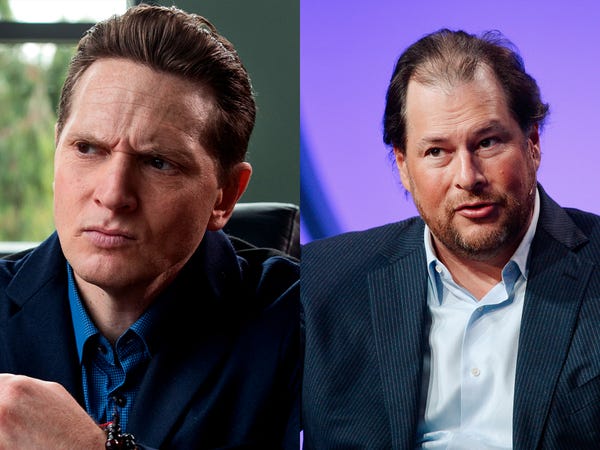 Gavin Belson (played by Matt Ross) fits all the requirements of a Silicon Valley titan — down to the five-finger running shoes inspired by Sergey Brin’s shoe wear aesthetic.

Gavin, who was CEO of a Google-like company called Hooli until his season-four firing, wants to make the world a better place, better than anyone else can. He does so by trampling his competition and lawyering up when someone gets in his way, just like Oracle’s Larry Ellison.

“The CEO of Hooli is clearly patterned after (Salesforce CEO) Marc Benioff,” BuzzFeed founder Jonah Peretti wrote. They both run enterprise companies while also “bettering the world through charity, destroying the competition, and seeking spiritual council from gurus.”

The late Peter Gregory embodied Peter Thiel to his core. (The actor who played him, Christopher Evan Welch, died of a heart attack midway through filming season one.) 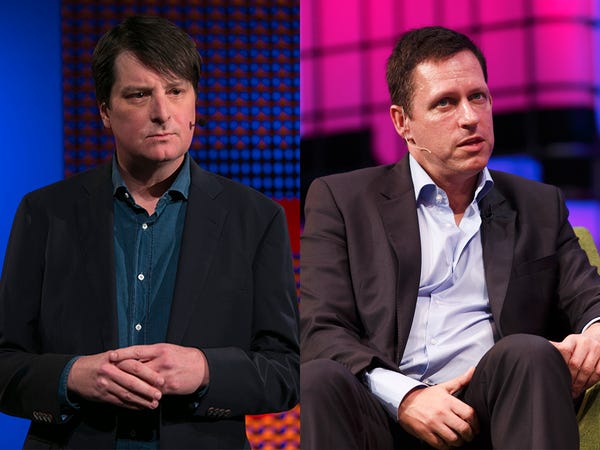 Gregory encouraged young genius geeks to drop out of college and start companies, which sounds a lot like the mission of the Thiel Fellowship. But “Silicon Valley” showrunner Alex Berg said Gregory was never intended to be a caricature of Thiel.

“The honest answer is we didn’t even really know who Peter Thiel was when we did season one, and then people kept saying that the Peter Thiel character, and we started looking at Peter Thiel videos and were like, ‘Oh, I can see why people are saying that,'” Berg told INSIDER.

Laurie Bream keeps everyone in line just like Marissa Mayer at the helm of Yahoo. 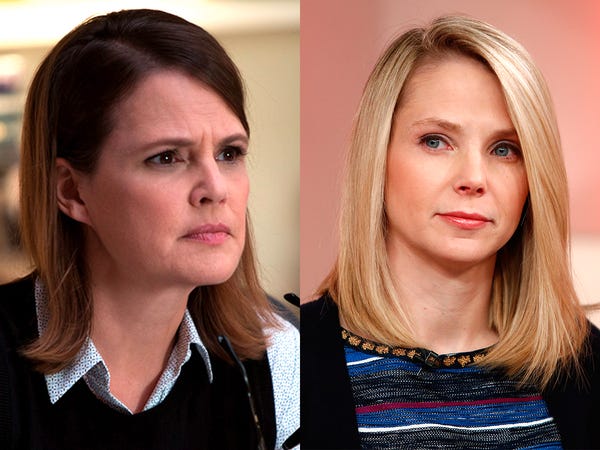 Laurie Bream (played by Suzanne Cryer) is awkward and ruthless as the cofounder of her own venture firm, Bream Hall. Laurie is cutthroat, speaks very mechanically, and places huge value on metrics. Sound familiar?

Nicholas Carlson, Business Insider’s global editor-in-chief and author of “Marissa Mayer and the Fight to Save Yahoo!” once described ex-Yahoo CEO Marissa Mayer as “cold and direct and impersonal. In a one-on-one she can’t hold eye contact,” like Laurie when she delivers bad news.

The show’s creator Mike Judge said the character was inspired by “these super-intelligent people who think faster than they can talk” and denied any correlation to Mayer.

Jack Barker draws inspiration from a surprising writing consultant on the show. 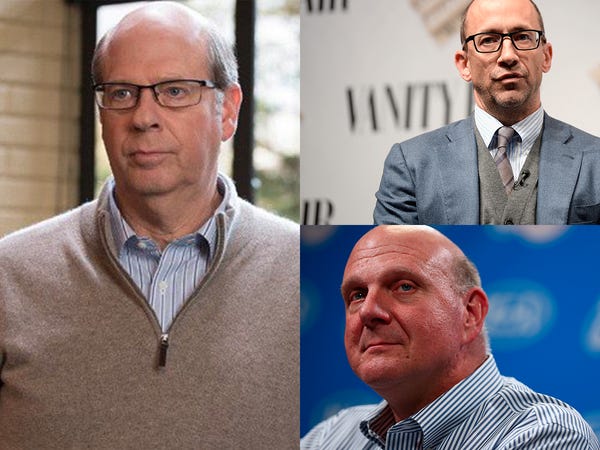 Jack Barker (played by Stephen Tobolowsky) has more than baldness in common with the former Twitter CEO, Dick Costolo. His character usurps the CEO seat at Pied Piper from founder Richard in season two, just like Costolo rose to take Jack Dorsey’s job in real life.

Surprisingly, Costolo became a writing consultant on “Silicon Valley” after he left Twitter in 2015, and he allowed his story to become plot-fodder for season three, according to Sorgatz.

Jack, who briefly held the role of Hooli CEO after Gavin’s firing, also reminds us of former Microsoft CEO Steve Ballmer, who Sorgatz called “the quintessential salesman without product vision.” While Jack steered Pied Piper toward hardware in season three, Ballmer chose to prioritize Windows PCs rather than directly combat the meteoric rise of the iPhone.

Erlich Bachman wanted to be Steve Jobs, but he was more like Sean Parker. 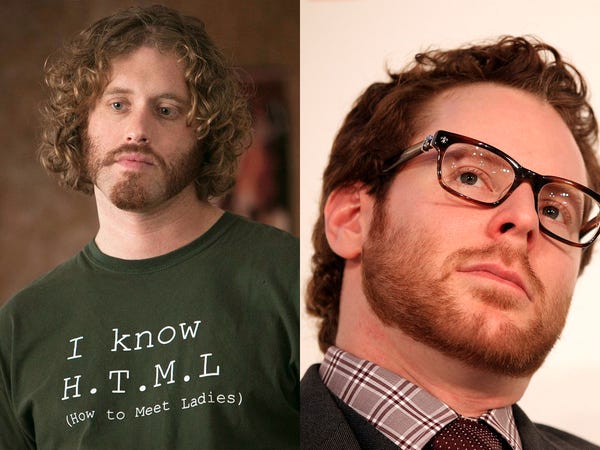 TJ Miller, who played the bombastic techie Erlich Bachman, left the series in 2017.

Long before Erlich’s unresolved disappearance, he sold his startup Aviato and bought a mansion in the Valley, which he turned into a tech incubator for entrepreneurs.

Erlich, a sandal-wearing visionary with a couple of loose screws, reminded us of tech billionaire and investor Sean Parker. Erlich was often seen smoking from a bong. Coincidentally, Parker contributed $8.5 million to the effort to legalize recreational marijuana in California in 2016.

In 2014, actor Miller told TechCrunch that he based the character’s delivery and demeanor on Binu Girija, the founder of Way.com, an online marketplace for services. Girija is known for sinking the money from his successful startup exits into one of his failures, losing it all.

Monica Hall is a rising star on the VC landscape, much like real investor Megan Quinn. 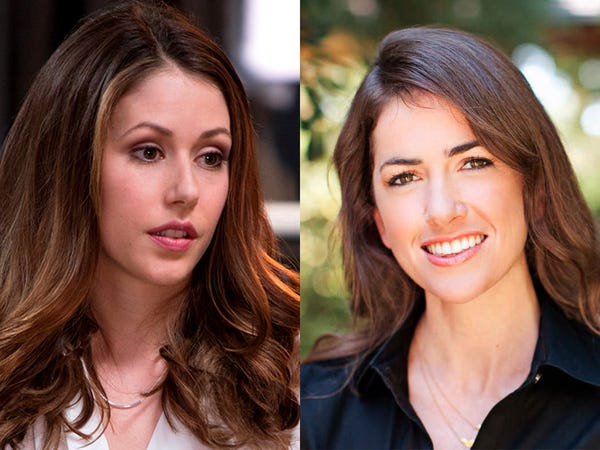 Monica Hall (played by Amanda Crew) made a splash as the youngest associate partner at Raviga and later joined Laurie Bream in starting an all female-founded venture firm.

Some have compared Monica to Megan Quinn, a general partner at Spark Capital, who focuses on growth investments. Her résumé includes partner at the elite venture firm Kleiner Perkins, director of products at mobile payments company Square, and product manager at Google.

In 2014, the real Quinn tweeted, “So far three people have said there’s a character on HBO’s Silicon Valley [sic] that’s a lot like me. I’m a snowflake, people.”

Russ Hanneman and Mark Cuban are two peas in a pod. 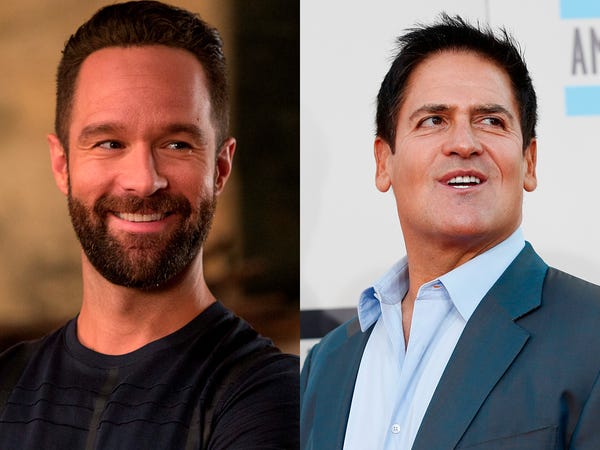 It’s been a celebration ever since. Russ launched a liquor brand called Tres Commas Tequila, while Cuban peddles T-shirts emblazoned with three commas on his website, Sorgatz wrote.

Your morning cheat sheet to get you caught up on what you need to know in tech. Sign up to 10 Things in Tech You Need to Know Today.