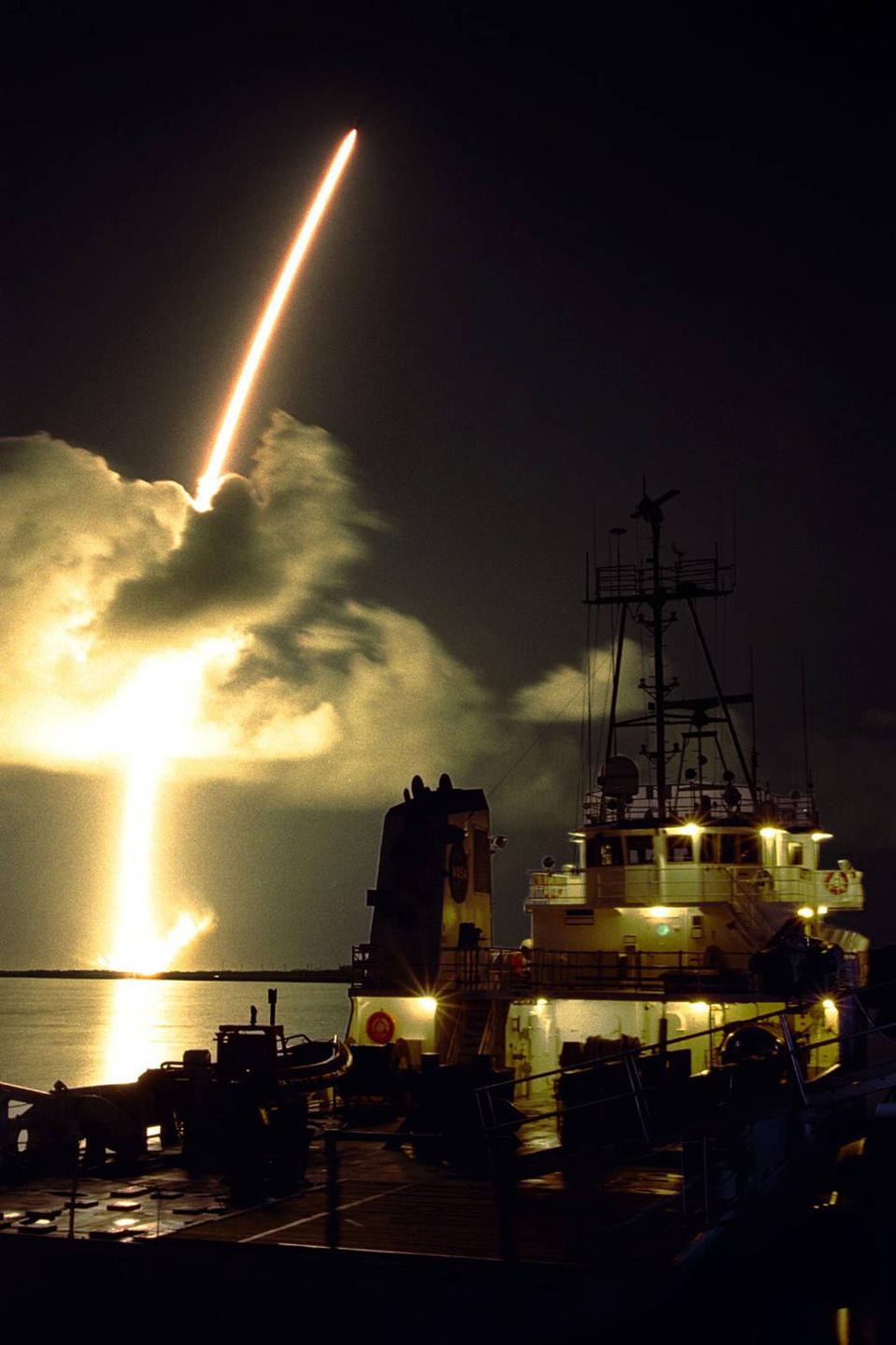 The launch of Cassini, on October 15, 1997. This spectacular streak shot was taken from Hangar AF on … [+] Cape Canaveral Air Force Station, with a solid rocket booster retrieval ship in the foreground. For all of our history on Earth, the only way we’ve ever reached space is through the use of chemical-based fuels.

For as long as human beings have been watching the night sky, we’ve dreamed of visiting other worlds and truly seeing what’s out there in the Universe. While our chemical-based rockets have taken us to a myriad of planets, moons, and other bodies in the Solar System, the farthest spacecraft ever launched by humanity — Voyager 1 — is only 22.3 billion kilometers (13.9 billion miles) from Earth: just 0.056% of the distance to the closest known star system. With current technology, it would take close to 100,000 years to travel to another star system.

But there’s no need to restrict ourselves to doing things the way we’re doing them right now. With the right technology, we could vastly improve how efficient it is to get a large-payload mass, perhaps even one that carried humans on board, to unprecedented distances across the Universe. In particular, there are four technologies that have the potential to take us to the stars on much shorter timescales. Here’s how. 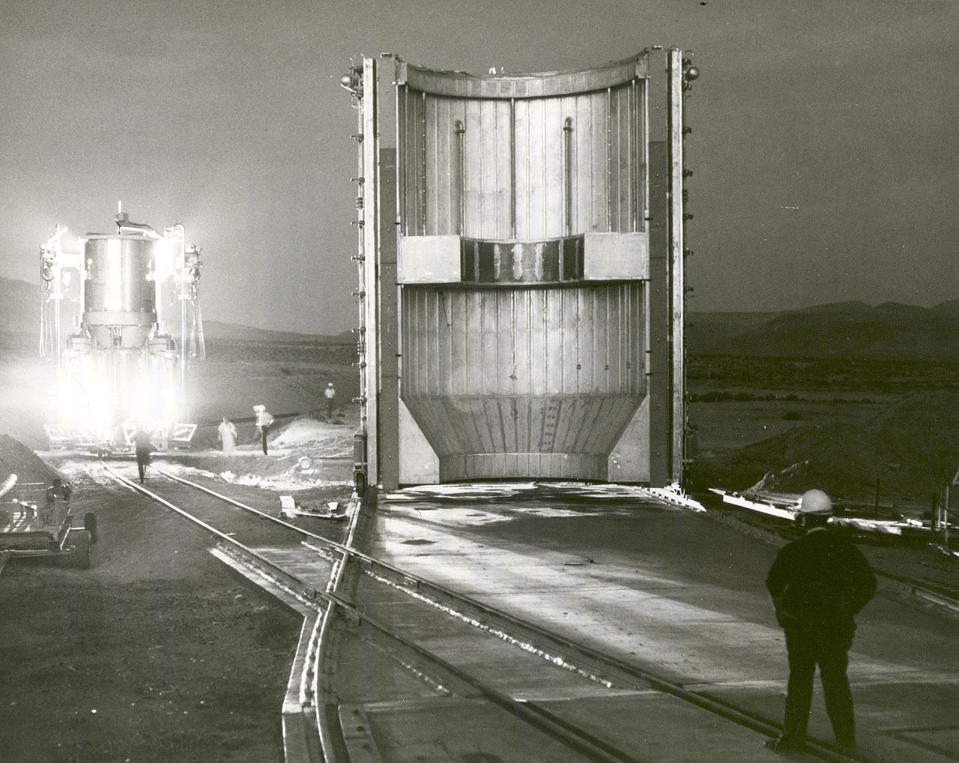 A nuclear-powered rocket engine, preparing for testing in 1967. This rocket is powered by … [+] Mass/Energy conversion, and is underpinned by the famous equation E=mc^2. Although this concept has never led to a successful rocket, it could be the future of interstellar space travel.

1.) The nuclear option. At this point in human history, every rocket we’ve ever launched into space has one thing in common: it’s been propelled by chemical-based fuel. Yes, rocket fuel is a special mix of chemical fuels designed to maximize thrust, but the “chemical fuel” part is very important: it states that the reactions powering it rely on the rearrangement of bonds between various atoms to provide energy.

This is fundamentally limiting! For an atom, the overwhelming majority of its mass is in the atom’s nucleus: 99.95%. When you’re engaging in a chemical reaction, the electrons orbiting the atoms get rearranged, typically releasing somewhere around 0.0001% of the total mass of the atoms involved in the form of energy, via Einstein’s famous equation: E = mc². That means, for every 1 kilogram of fuel you load up your rocket with, you’ll only get the energy equivalent of somewhere in the ballpark of 1 milligram of mass out of the reaction. 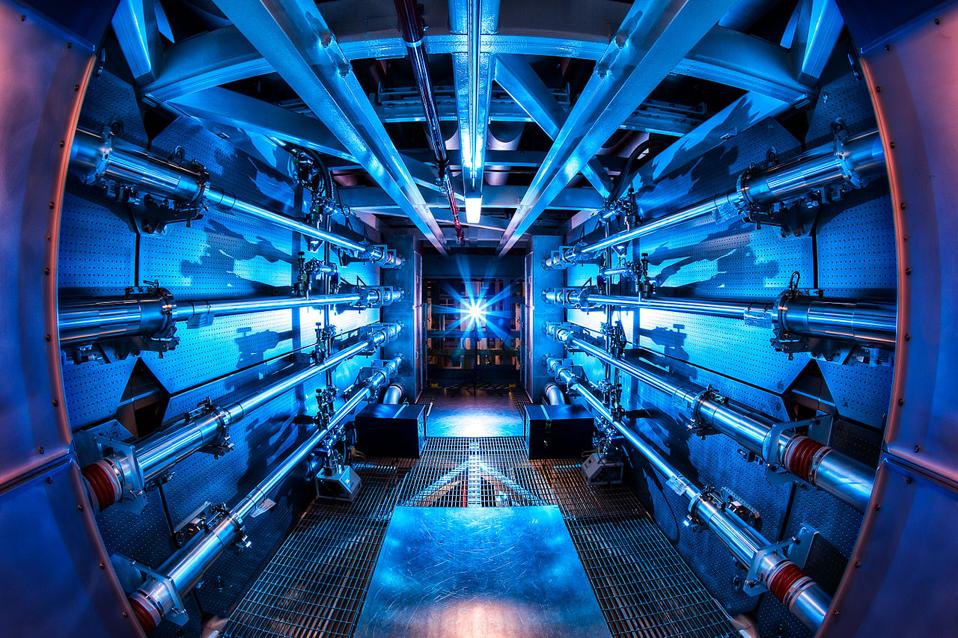 The preamplifiers of the National Ignition Facility are the first step in increasing the energy of … [+] laser beams as they make their way toward the target chamber. NIF recently achieved a 500 terawatt shot – 1,000 times more power than the United States uses at any instant in time. Nuclear fusion is thousands of times more efficient than any chemical-based reaction.

But if you went with a nuclear-based fuel, that story changes dramatically. Instead of relying on changing how electrons are configured and how atoms are bonded together, you could release comparatively enormous amounts of energy by altering how atomic nuclei themselves are bound to one another. When you split apart a Uranium atom by bombarding it with a neutron, it emits an enormous amount of energy compared to any chemical-based reaction: 1 kilogram of U-235 fuel can release the energy equivalent of 911 milligrams of mass, a factor of ~1000 times more efficient than chemical-based fuels.

If we were to master nuclear fusion instead, such as with an inertial-confinement fusion system that was capable of fusing hydrogen into helium — the same chain reaction that takes place in the Sun — we could become even more efficient. Fusing 1 kilogram of hydrogen fuel into helium would turn 7.5 grams of mass into pure energy, making it nearly 10,000 times as efficient as chemical-based fuels.

The key is that we’d be able to achieve the same accelerations for a rocket for far longer periods of time: hundreds or even thousands of times as long, enabling us to reach speeds hundreds or thousands of times greater than conventional rockets achieve today. It could cut the interstellar travel time down to mere centuries or perhaps even decades. It’s a promising avenue that might be achievable, depending on how the technology develops, before we hit the year 2100. 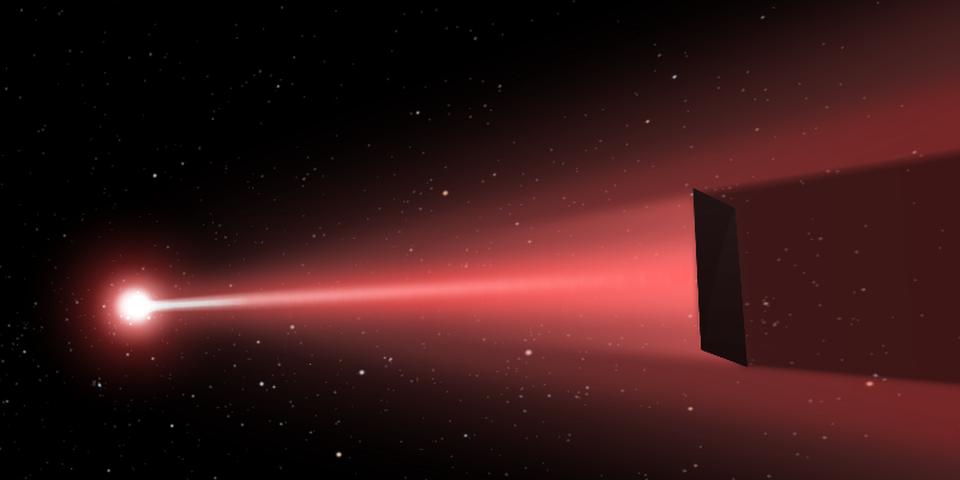 The DEEP laser-sail concept relies on a large laser array striking and accelerating a relatively … [+] large-area, low-mass spacecraft. This has the potential to accelerate non-living objects to speeds approaching the speed of light, making an interstellar journey possible within a single human lifetime.

2.) A space-based laser array. This was the main idea behind the “Breakthrough Starshot” concept that gained notoriety a few years ago, and it remains an exciting concept. Whereas conventional spacecraft rely on bringing their own fuel on board and expending it to self-accelerate, the key idea at play here is that a large, high-powered laser array would provide the needed thrust to an external spacecraft. In other words, the source of the thrust would be separate from the spacecraft itself.

This is a fascinating concept, and a revolutionary one in many ways. Laser technology is successfully becoming not only more powerful, but more highly collimated as well, which means that if we can engineer a sail-like material that could reflect a high enough percentage of that laser light, we could use that laser blast to accelerate a spacecraft to tremendous speeds away from the source of our array. A ~1 gram-mass “starchip” could conceivably reach ~20% the speed of light, which would enable it to arrive at Proxima Centauri, our nearest star, in just 22 years. 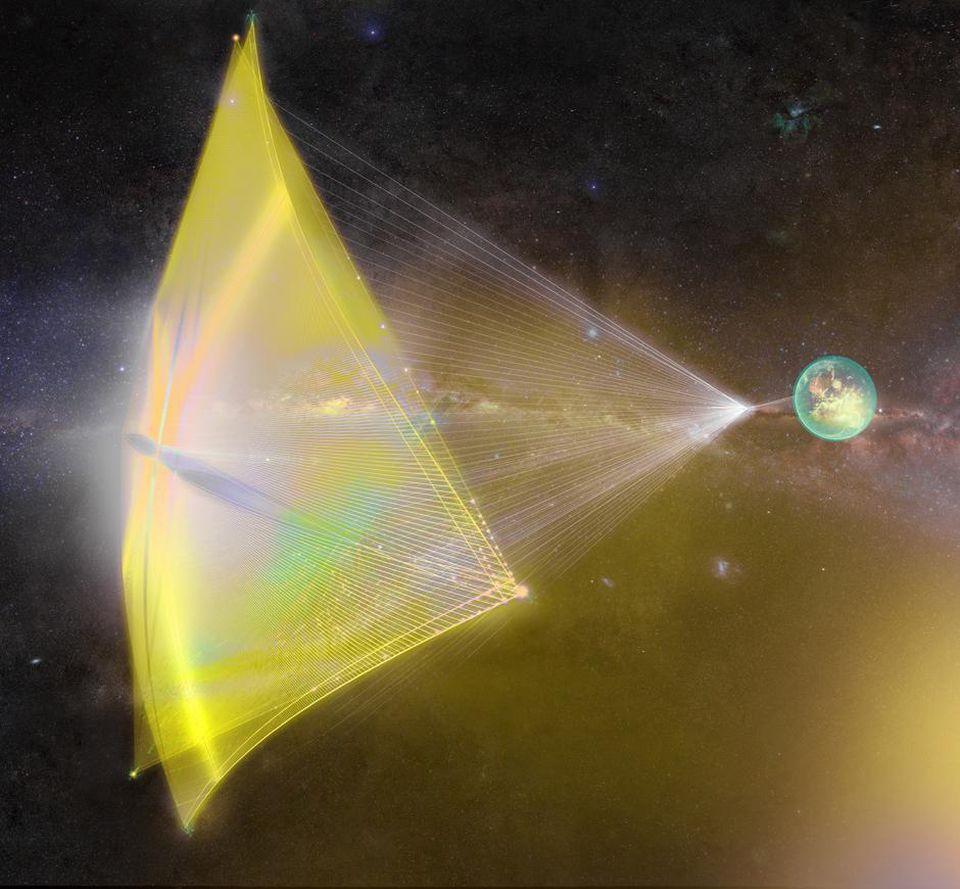 The laser sail concept, for a starchip-style starship, does have the potential to accelerate a … [+] spacecraft to about 20% the speed of light and reach another star within a human lifetime. It’s possible that, with enough power, we could even send a crew-carrying spacecraft to span the interstellar distances.

Sure, we’d have to build a tremendous laser array: about 100 square kilometers’ worth of lasers, and we’d have to do it in space, but that’s a problem of cost, not science or technology. But there are technological problems that do need to be overcome for this to work, including:

This technology could, perhaps, someday take us to the stars, but a successful plan to take humans up to ~20% the speed of light hasn’t yet come out. 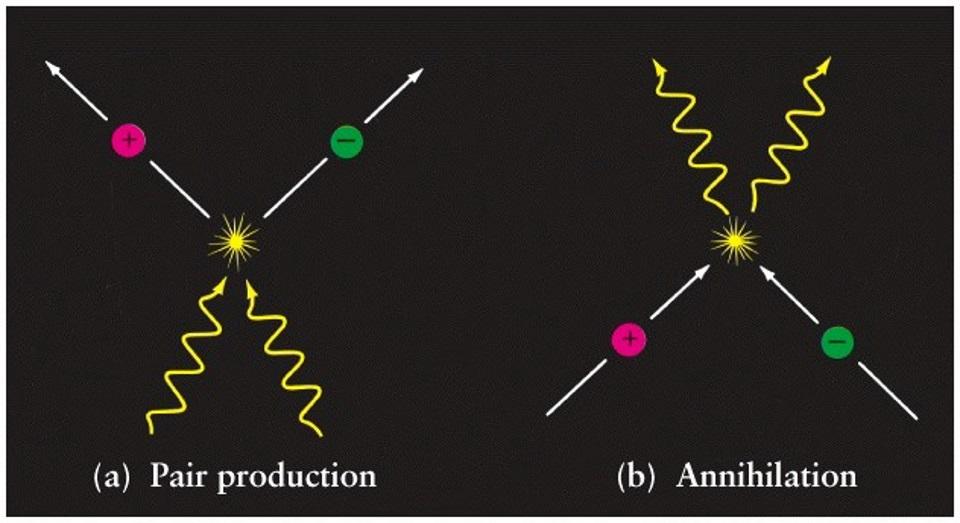 3.) Antimatter fuel. If we’re going to bring fuel with us, we might as well make it the most efficient fuel possible: matter-antimatter annihilations. Rather than chemical-based or even nuclear-based fuels, where only a portion of the mass brought on board gets converted to energy, a matter-antimatter annihilation would convert 100% of the mass of both matter and antimatter into energy. This is the ultimate in efficiency for fuel: the prospect of converting all of it into energy that could be used for thrust.

The difficulty comes only in practice, and in particular, on three fronts:

Excitingly enough, the first two challenges are already being overcome. 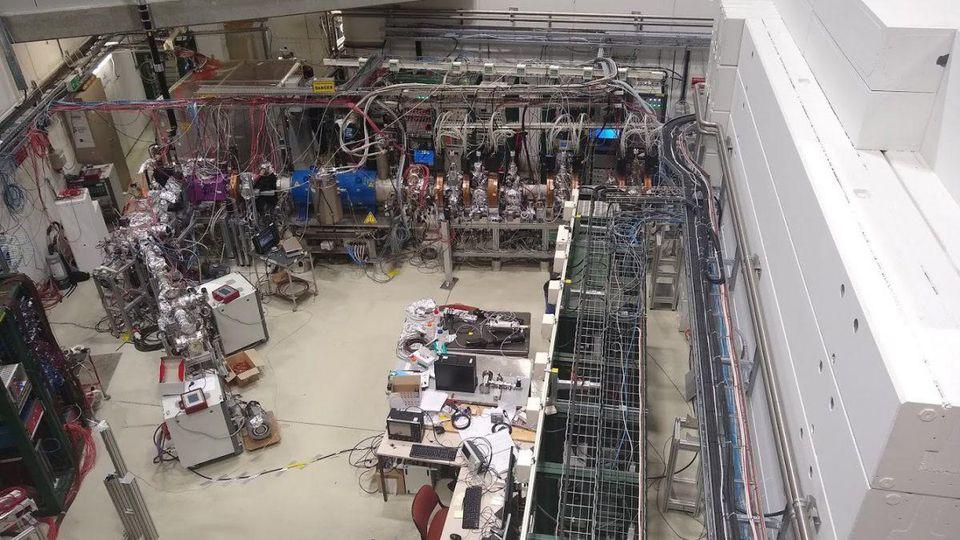 A portion of the antimatter factory at CERN, where charged antimatter particles are brought together … [+] and can form either positive ions, neutral atoms, or negative ions, depending on the number of positrons that bind with an antiproton. If we can successfully capture and store antimatter, it would represent a 100% efficient fuel source, but many tons of antimatter, as opposed to the tiny fractions of a gram we’ve created, would be required for an interstellar journey.

At CERN, the home of the Large Hadron Collider, there’s an enormous complex known as “the antimatter factory,” where at least six separate teams are researching the various properties of antimatter. They take antiprotons and slow them down, forcing positrons to bind with them: creating anti-atoms, or neutral antimatter.

They confine these anti-atoms in a vessel with alternating electric and magnetic fields, which effectively pin them in place, away from the container walls that are made of matter. At this point in time, mid-2020, they’ve successfully isolated and kept stable multiple anti-atoms for nearly an hour at the same time. At some point within the next few years, they’ll be good enough at this that they’ll be able to measure, for the first time, whether antimatter falls up or down in a gravitational field.

It’s not necessarily a near-term technology, but it could wind up being our fastest means of interstellar travel of all: an antimatter-driven rocket. 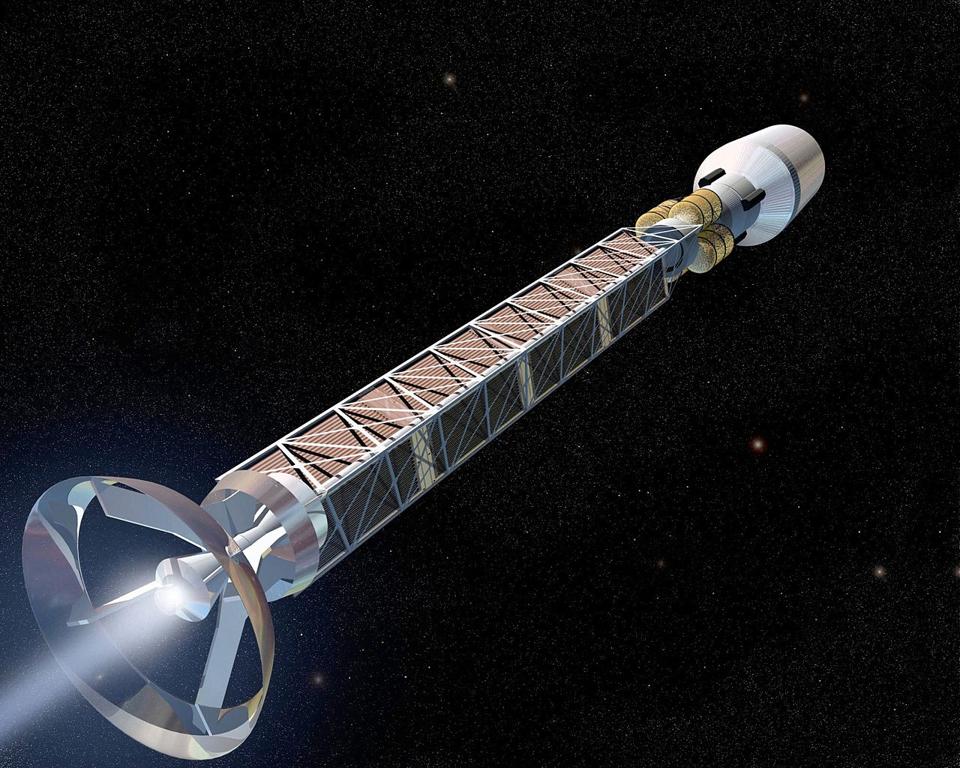 All rockets ever envisioned require some type of fuel, but if a dark matter engine were created, new … [+] fuel is always to be found simply by traveling through the galaxy. Because dark matter doesn’t interact with normal matter (mostly) but passes right through it, you wouldn’t have any difficulty collecting it in a specific volume of space; it would always be there as you moved through the galaxy.

There’s some potential evidence for this, as not only the Milky Way but other galaxies as well are observed to have an unexplained excess of gamma-rays coming from their galactic centers, where the dark matter density should be greatest. It’s always possible that there’s a mundane astrophysical explanation for this — such as pulsars — but it’s also possible that dark matter is annihilating with itself in the centers of galaxies, bringing up an incredible possibility: a dark matter-fueled spacecraft. 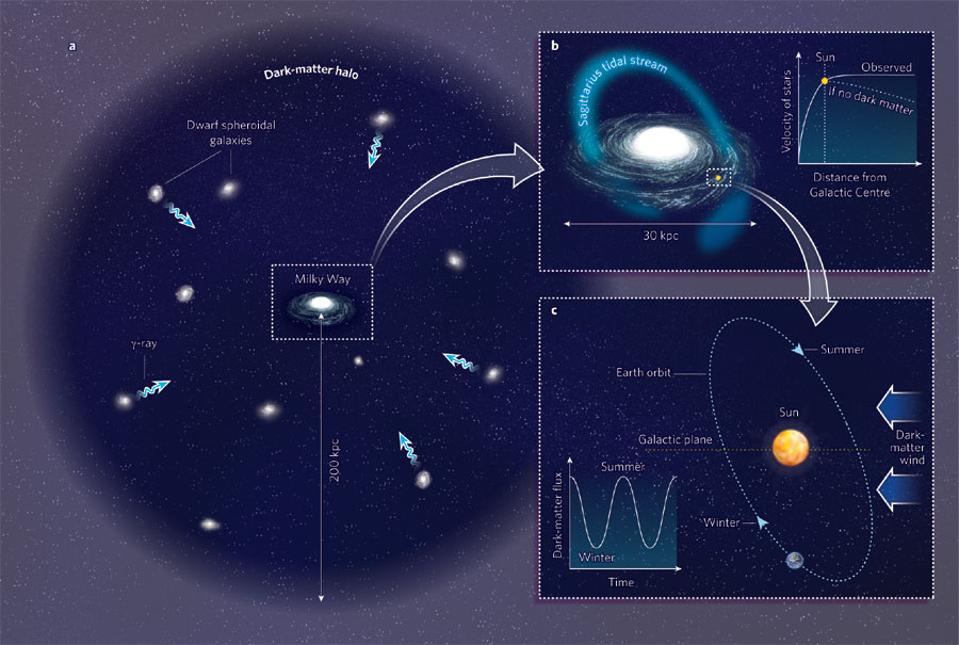 Our galaxy is thought to be embedded in an enormous, diffuse dark matter halo, indicating that there … [+] must be dark matter flowing through the solar system. Although we have yet to detect dark matter directly, its abundant presence throughout our galaxy and beyond might provide a perfect recipe for the perfect rocket fuel imaginable.

The advantage of this is that dark matter is literally everywhere throughout the galaxy, meaning that we wouldn’t need to take fuel with us on a journey to wherever we went. Instead, a dark matter “reactor” could simply:

and we could control the size and magnitude of the reactor to achieve the desired results.

Without the need for carrying fuel on-board, many of the problems of propulsion-driven space travel would become non-issues. Instead, we’d be able to achieve the ultimate dream of travel: unlimited constant acceleration. From the perspective of the spaceship itself, this would open up one of the most imaginative possibilities of all, the ability to reach any location in the Universe within a single human lifetime. 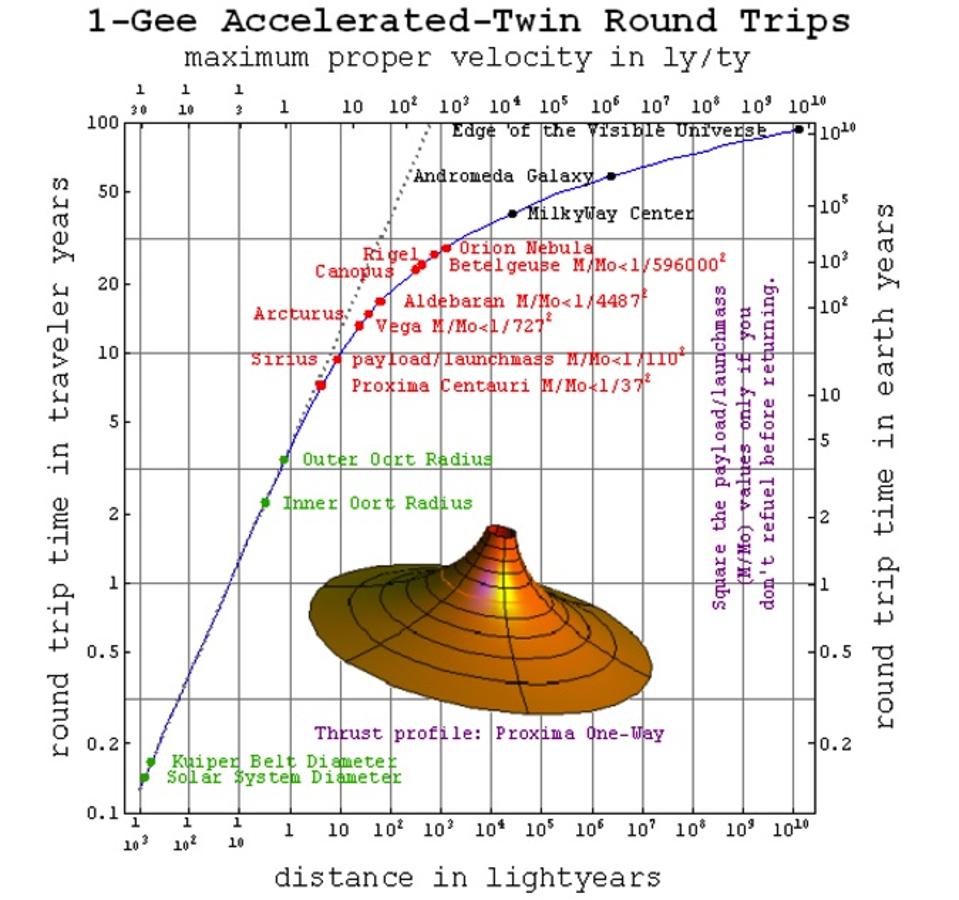 The travel time for a spacecraft to reach a destination if it accelerates at a constant rate of … [+] Earth’s surface gravity. Note that, given enough time at an acceleration of 1g, you can reach any location in the Universe within a single human lifetime.

If we restrict ourselves to current rocket technology, it will take tens of thousands of years — at minimum — to complete a journey from Earth to the nearest solar system beyond our own. But enormous advances in propulsion technologies are within reach, and could reduce that journey to within a single human lifetime. If we can master the use of nuclear fuel, of spaceborne laser arrays, of antimatter, or even of dark matter, we could realize our dream of becoming a spacefaring civilization without invoking physics-breaking technologies such as warp drive.

There are multiple potential avenues to turn what’s already been demonstrated as scientifically valid into a feasible, viable, next-generation propulsion technology. By the end of the century, it’s absolutely a possibility that a spacecraft that hasn’t been designed yet will overtake New Horizons, the Pioneer, and Voyager missions as the most distant objects from Earth. The science is already there. It’s up to us to look beyond the limitations of our current technologies and bring this dream to fruition.